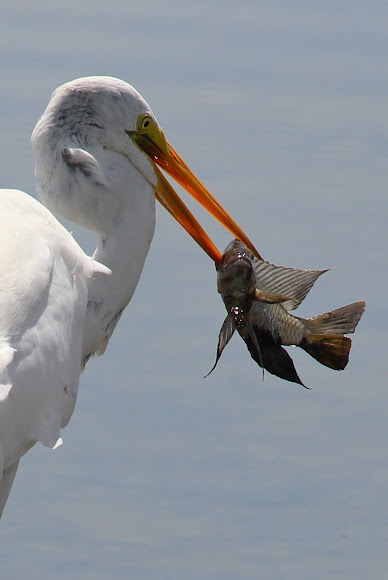 The great egret feeds in shallow water or drier habitats, feeding mainly on fish, frogs, small mammals, and occasionally small reptiles and insects, spearing them with its long, sharp bill most of the time by standing still and allowing the prey to come within its striking distance of its bill which it uses as a spear. It will often wait motionless for prey, or slowly stalk its victim.

Spotted at a lagoon in Antigua. The great egret is partially migratory, with northern hemisphere birds moving south from areas with colder winters. It breeds in colonies in trees close to large lakes with reed beds or other extensive wetlands. It builds a bulky stick nest.

Thank you Sukanya. I'm not an expert on fish but I do believe it is indeed a tilapia.

Such a crisp and clear shot! Is the fish a Tilapia? I think so.

Thank you Antonio! I'll make sure to look at those pages you suggested.

Welcome to Project Noah Stefania F. R.
Very nice first spotting,congrats and thanks for sharing
We hope you like the site as much we do; there are many features you can explore:
We invite you to go to http://www.projectnoah.org/faq where you will find the purpose and “rules” of Project Noah.
There is a blog http://blog.projectnoah.org/ where we post articles from spotters with special insight into different organisms.
Look at the global and local missions to put your spottings into: http://www.projectnoah.org/missions