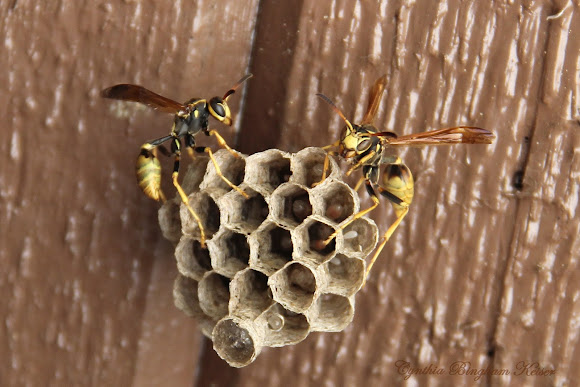 Black, yellow and brown wasp. The last image shows the small pattern of the abdomen. They build a nest of paper with hexagon combs that house their larvae as seen in this series.

Underside of a gazebo next to a lake.

Aka Yellow-legged Paper Wasp. "Recent research has discovered paper wasps have face recognition abilities comparable to humans. Unlike yellowjackets and hornets, which can be very aggressive, polistine paper wasps will generally only attack if they themselves or their nest are threatened. Since their territoriality can lead to attacks on people, and because their stings are quite painful and can produce a potentially fatal anaphylactic reaction in some individuals, nests in human-inhabited areas may present an unacceptable hazard." - Wikipedia

Hi Cindy. I know we discussed this before but regretfully, this demonstrates colonial/surrogate care but not individual parental care as defined by the mission. Cheers

Hello Cindy. Does this species engage in parental care or is it surrogate care as regards the Brooding behavior mission statement? Thanks for checking.

Thank you both. I was really happy to see these turn out this well. They're very beautiful wasps and the larva are big enough to see! :)