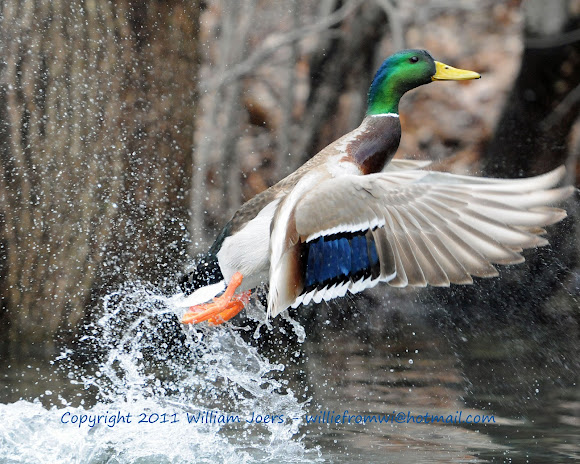 The breeding male is unmistakable, with a bright bottle-green head, black rear end and a yellowish orange bill tipped with black (as opposed to the black/orange bill in females). It has a white collar which demarcates the head from the purple-tinged brown breast, grey brown wings, and a pale grey belly. The dark tail has white borders.

The Mallard is widely distributed across the Northern Hemisphere, North America from southern and central Alaska to Mexico, the Hawaiian Islands, and across Eurasia, from Iceland and southern Greenland and parts of Morocco (North Africa) in the west, Scandinavia to the north, and to Siberia, Japan, and China in the east.

This Mallard duck takes to flight after the wind blows me and my kayak a bit closer to him then he might have been comfortable with.

oh wow !! its just stunning William ... thanks for sharing :)

such a good pic!

Thank you so much, CourtneyVerk, Annorion, KeithRoragen, AntónioGinjaGinja and MayraSpringmann. I truly appreciate you taking the time to both look at and comment on my spotting. I hope that in some small way, I can help others to see and love the beauty that can be found all around us, in nature.

The markings on the male Mallard are so vibrant and clear. It really makes you wonder why certain species develop these patterns. Wonderful action shot!