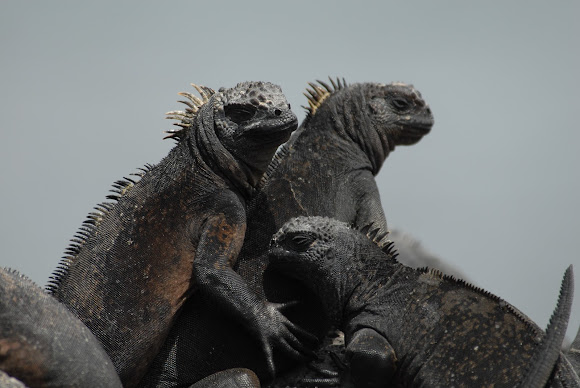 The Marine Iguana is an iguana found only on the Galápagos Islands. It's color varies based on season. These dark grey Isabel Island iguana's have red areas idicating the mating season has just ended.

It has spread to all the islands in the archipelago, and is sometimes called the Galápagos Marine Iguana. It mainly lives on the rocky Galápagos shore, but can also be spotted in marshes and mangrove beaches.

Iguanas size is different depending on the island the individual iguana inhabits. The iguanas living on the islands of Fernandina and Isabela (named for the famous rulers of Spain) are the largest found anywhere in the Galápagos.

That you for the ID confirmation

This would be one of those for sure

I loved it! I want to go back but there are so manylaces I have yet to visit so....forward!

great photos by the way. Galapagos was really incredible, wasn't it?

I think I finally figured it out. I didn't realize I could enlarge the map to find the Islands! They are all fixed. Thanks for your help. Live and learn.

I will take suggestions on how to get the location exact. It will not take Isabela Island, Galapagos Islands etc. Help?

yes, i saw these on the Galapagos Islands. Fixed the location.

I don't understand how you saw these in the middle of Ecuador. I saw them in the Galapagos...