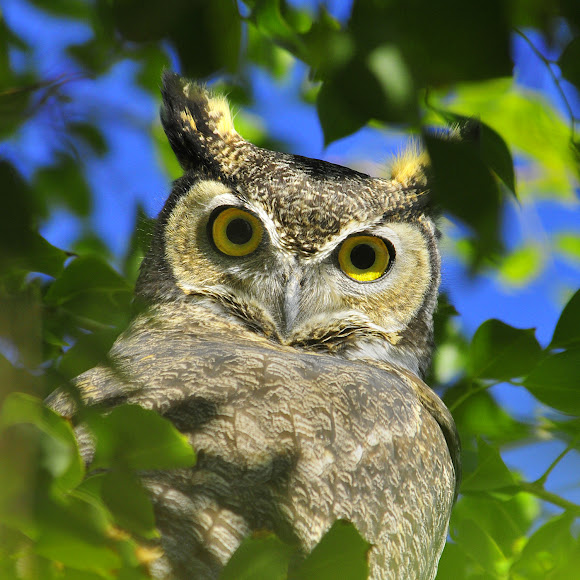 Found from the Arctic tundra to the tropical rainforest, from the desert to suburban backyards, the Great Horned Owl is one of the most widespread and common owls in North America. Found in a wide variety of habitats, but prefers open and secondary-growth woodlands and agricultural areas.

The Great Horned Owl is the only animal that regularly eats skunks. The Great Horned Owl will take large prey, even other raptorial birds. It regularly kills and eats other owls, and is an important predator on nestling Ospreys. The reintroduction of Peregrine Falcons has been hampered in some areas by owls killing both adult and nestling falcons. The Great Horned Owl is a regular victim of harassment from flocks of American Crows. Crows congregate from long distances to mob owls, and may continue yelling at them for hours. The enmity of the crows is well earned, however, as the owl is probably the most important predator on adult crows and nestlings. Even though the female Great Horned Owl is larger than her mate, the male has a deeper voice. Pairs often call together, with audible differences in pitch. Broad diet of animals, from small mammals to rabbits, geese, and herons. Some birds, amphibians, reptiles, and invertebrates, but mostly mammals.

What a shot! Awesome!

Christy,
Just added him to the Raptors of North America Mission
Thanks....

Love that look!! Here's another I'd love you to add to the mission Raptors of North America: http://www.projectnoah.org/missions/8627...

They are amazingly beautiful.