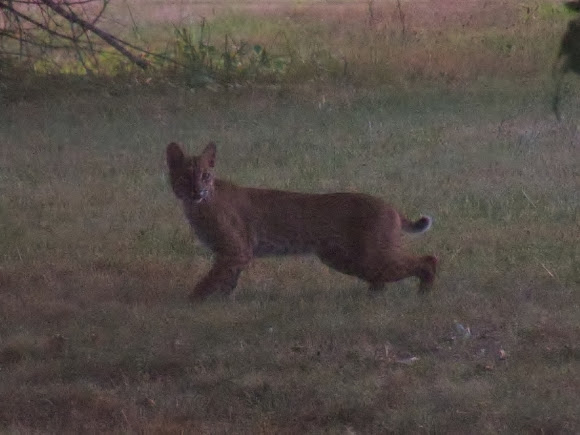 The bobcat resembles other species of the Lynx genus but is on average the smallest of the four. Its coat is variable, though generally tan to grayish brown, with black streaks on the body and dark bars on the forelegs and tail. Its spotted patterning acts as camouflage. The ears are black-tipped and pointed, with short black tufts. There is generally an off-white color on the lips, chin, and underparts. Bobcats in the desert regions of the southwest have the lightest colored coats, while those in the northern, forested regions are darkest. Kittens are born well-furred and already have their spots.[10] A few melanistic bobcats have been sighted and captured in Florida. They appear black, but may still exhibit a spot pattern.[11] The face appears wide due to ruffs of extended hair beneath the ears. Bobcat eyes are yellow with black pupils. The nose of the bobcat is pinkish-red, and it has a base color of gray or yellowish- or brownish-red on its face, sides, and back.[12] The pupils are round black circles and will widen during nocturnal activity to maximize light reception.[13] The cat has sharp hearing and vision, and a good sense of smell. It is an excellent climber, and will swim when it needs to, but will normally avoid water.[14] The adult bobcat is 47.5 to 125 cm (18.7 to 49 in) long from the head to the base of the tail, averaging 82.7 cm (32.6 in); the stubby tail adds 9 to 20 cm (3.5 to 7.9 in) [12] and, due to its "bobbed" appearance, it gives the species its name.[15][16][17][18] An adult stands about 30 to 60 cm (12 to 24 in) at the shoulders.[10][19] Adult males can range in weight from 6.4 to 18.3 kg (14 to 40 lb), with an average of 9.6 kg (21 lb); females at 4 to 15.3 kg (8.8 to 34 lb), with an average of 6.8 kg (15 lb).[20][21] The largest bobcat accurately measured on record weighed 22.2 kg (49 lb), although there are unverified reports of them reaching 27 kg (60 lb).[22][22] Furthermore, a June 20, 2012 report of a New Hampshire roadkill specimen listed the animal's weight at 27 kg (60 lb).[23]The largest-bodied bobcats are from eastern Canada and northern New England of the subspecies (L. r. gigas), while the smallest are from the southeastern subspecies (L. r. floridanus), particularly those in the southern Appalachians.[24] The bobcat is muscular, and its hind legs are longer than its front legs, giving it a bobbing gait. At birth it weighs 0.6 to 0.75 pound (270 to 340 g) and is about 10 inches (25 cm) in length. By its first year it will reach about 10 pounds (4.5 kg).[14] The cat is larger in its northern range and in open habitats.[25] A morphological size comparison study in the eastern United States found a divergence in the location of the largest male and female specimens, suggesting differing selection constraints for the sexes.[26]

The bobcat is an adaptable animal. It prefers woodlands—deciduous, coniferous, or mixed—but unlike the other Lynx species it does not depend exclusively on the deep forest. It ranges from the humid swamps of Florida to desert lands of Texas or rugged mountain areas. It will make its home near agricultural areas, if rocky ledges, swamps, or forested tracts are present, its spotted coat serving as camouflage.[27] The population of the bobcat depends primarily on the population of its prey; other principal factors in the selection of habitat type include protection from severe weather, availability of resting and den sites, dense cover for hunting and escape, and freedom from disturbance.[9] The bobcat's range does not seem to be limited by human populations, as long as it can find a suitable habitat; only large, intensively cultivated tracts are unsuitable for the species.[25] The animal may appear in backyards in "urban edge" environments, where human development intersects with natural habitats.[52] If chased by a dog it will usually climb up a tree.[27]

This cat was running through our front yard, paused while I took a couple pictures (not the best as it was dusk and I was trying to stay back a bit from the window so as not to scare it), and ran off.

Wow, this is 20 minutes from where I live. I had no idea

Good work, decent pictures for the time of day!