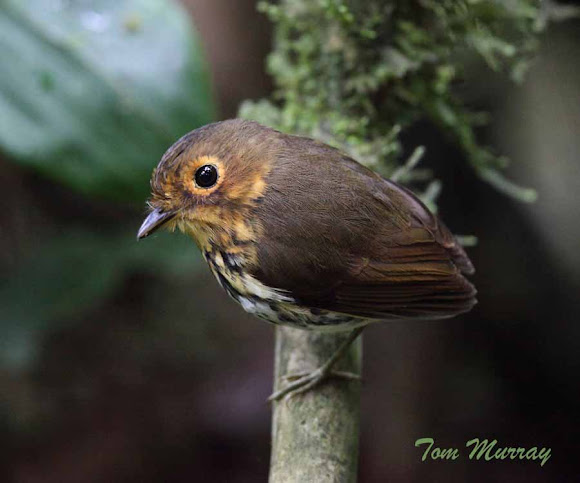 This tiny antpitta inhabits the undergrowth of wet montane forest at elevations of 500–2750 m, from Costa Rica south over both slopes of the Andes, as far as southern Ecuador in the west, and to central Bolivia on the east slope. Considerable morphological variation has led to the description of eight subspecies, which vary quite dramatically in underparts coloration and pattern, and to a lesser extent in face pattern, but to date the species’ vocalizations are so incompletely known that it is impossible to draw any conclusions as to whether more than one species is involved. All of them are generally olive-brown above, but below they vary from being largely rufous to heavily scalloped on a pale buff background, or more streaked over a buff or virtually white background. The Ochre-breasted Antpitta is, like all Grallaricula, still very poorly known in terms of its ecology and behavior, which is unsurprising considering how difficult the species is to observe. (Cornell)

Cody, the 6D must give you nice results, ISO 12,800 is way up there. I'm using the 5D MarkII now and am hoping I can get a newer camera this year. It'll be interesting what features the 7D MarkII has when it comes out later this year.

Hah, it's marla! This came out good considering the iso5000. With the canon 6D I have found iso 12,800 useable in many cases if you NAIL the exposure at the time it's shot. What body are you currently mastering?

Thanks Sri and Saumya.

Such an adorable bird !

Thanks the-forest-room1, habitatlover24 and Neil. It was fun and exciting to see this cute little bird.

So cute and small

Thanks Leuba and Kranti. These birds just have a stubby little tail, and I think they are cute too.

One of the cutest birds I've ever seen ! the tail's not seen-perhaps that's one of the reasons ? Still lovely plumage and a great spotting. thanks for sharing this Tom and for the information.