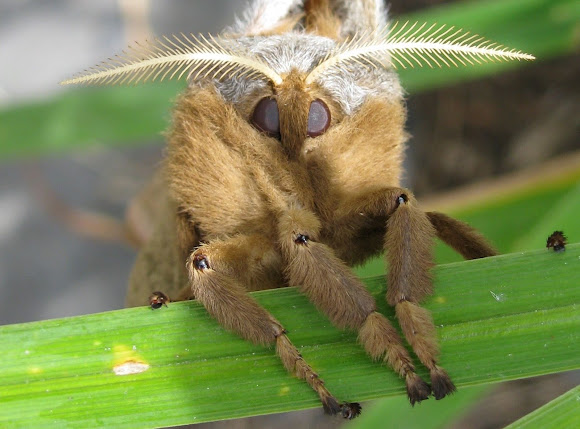 The Polyphemus Moth, Antheraea polyphemus, named after the huge cyclops Odysseus fought in Homer's "Odyssey," is one of the largest moths in North America, with the largest measuring to fifteen centimeters, or about six inches. The Polyphemus Moth is greatly characterized by the small round eyespots on the forewing, and the large, dark eyespot on the hind wings, both of which are usually visible at rest. The Polyphemus Moth is the most widespread silk moth in North America, ranging from Southern Canada, to all 48 of the continental United States. The adults do not feed, depending on energy gained while eating as a caterpillar. They live long enough to find a mate to keep the species going. The shiny "knees" are due to lack of hair, resulting in an exposed exoskeleton.

The moth was injured when it was found, for unknown reasons. Taken in 2009 with a Canon Powershot SX110 IS. I hope you enjoy this as much as I enjoyed experiencing this!

Thank you so much, Kranti!!

Thank you so much Terri!

Karen, I'm not 100%, but Nina helped me earlier in the comments on this spotting, and these links seem to help:

Here is the female:
http://bugguide.net/node/view/5041

The while both males and females have large antennae, it looks to me as if the male has larger segments on the antennae that protrude further outward.

Jacob, are you sure this is a female? The antennae look very large to me, more like the males.

Thank you very much, Toucan!

Thank you very much, Tena!

Thank you very much, Patty and Blaise. I'm not sure I knew what to make of it either at first glance!

Nice! In the first picture, it looks like he doesn't know what to make of you. :)

Thanks bhargav and Jonathan! That means a lot!

Emma, that is actually just because of the lack of hairs on the knees, so it is just an exposed exoskeleton.

In this case the joints are black?

Thank you so much, Francis!

Thank you for the kind comment, Carol! You deserve everyone of those comments I have given you, and the IDs as well!

Great spot! I love it! Amazing! I missed this. WOW! And thanks for helping me with ID and liking my moths too.

I am really interested how these huge moths (i.e. most of the giant silk moths) can function just by keeping energy they had when they were in the larval stage. Any ideas how they can retain so much energy?

Thanks Emma! That means a lot! I think adding the type of camera helps people who are interested in buying a new camera. Canon now has a newer version, but it has gained a reputation as a battery hog.
http://www.amazon.com/Canon-PowerShot-Wi...
Thank you, Jolly and Mayra!