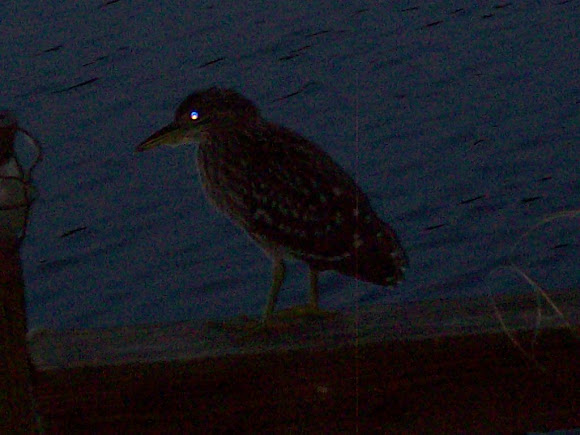 Adults are approximately 64 cm (25 in) long and weigh 800 g (28 oz). They have a black crown and back with the remainder of the body white or grey, red eyes, and short yellow legs. They have pale grey wings and white under parts. Two or three long white plumes, erected in greeting and courtship displays, extend from the back of the head. The sexes are similar in appearance although the males are slightly larger. Black-crowned Night Herons do not fit the typical body form of the heron family. They are relatively stocky and about 25 in tall (63 cm) with shorter bills, legs, and necks than their more familiar cousins the egrets and "day" herons. Their resting posture is normally somewhat hunched but when hunting they extend their necks and look more like other wading birds. Immature birds have dull grey-brown plumage on their heads, wings, and backs, with numerous pale spots. Their underparts are paler and streaked with brown. The young birds have orange eyes and duller yellowish-green legs. They are very noisy birds in their nesting colonies, with calls that are commonly transcribed as quok or woc, woc.

The breeding habitat is fresh and salt-water wetlands throughout much of the world.

It was night-time, around 8:50 eastern time for U.S

No problem. Juveniles can be difficult to ID.

I looked all over before i posted this pic, thank you Sarah! awesome job!!!! :)

It is a black-crowned night heron (juvenile). The juveniles can be difficult to tell from the yellow-crowned night herons. Look for the bill being partially yellow and shorter legs. (Yellow crowned juvenile would have had an all black bill and longer legs.)

It looks like some kind of night heron to me, though very difficult to tell without being able to see the plumage correctly. If you can remember what it looked like, check out this website: http://www.allaboutbirds.org/guide/brows... Look at the night herons on the list, see if you can find one that matches. From the plumage, I think it's a juvenile, but I'm not up on North American birds so best to double check :)

regarding the image er I only got one shot of it, is it okay if I leave it? And i loaded it twice and there is no mistake

Welcome to Project Noah, Kevin Scheiber. Either your spotting didn't load correctly, or you have loaded an unidentifiable image. In either case, can you please replace it with an image of an identifiable organism? Thanks.

once a person has identified this I will gladly continue to edit and add info about it..... I just don't know what it is!!! :)