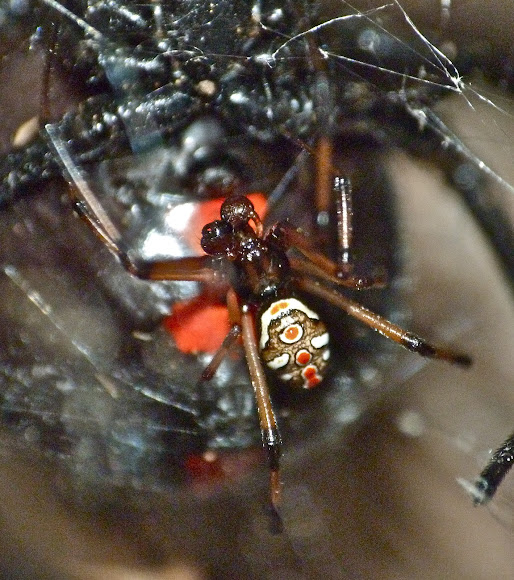 Tiny juvenile black widow apparently embalming his dying mother for later consumption! The enlarged palps indicate this is a male.

Females live for up to 5 years but this one had clearly reached the end of her life & was barely moving as one of her offspring began wrapping her in silk.

Oh no, I thought it was the male all along!

Thanks Dez, though I don't think there is much "love" happening here though as he's actually about to dine on his dying mother!

wow, you only ever see the female! I have never seen them together like this! brilliant!

Thanks Hanno!
Sofi, yes, there are so many weird & wonderful things I'm learning about wildlfe every day!

congrats !!
this is great shot KarenL

That's true Leuba! I've not been able to find any reference to sacrificial cannibalism in black widows so I'm guessing this one is just being opportunistic!

sounds awful but at least nothing is wasted - great photo of the juvenile !

That is a precious spotting Karen.

Thanks Jolly! Spiders don't seem to be too particular on what or who they eat!

Oops, I did not read the notes... Anyway its still brutally beautiful. An offspring eating the mother!

Very beautiful. Brutally beautiful! Imagine the female eating the male after doing it!

Oh my gosh! This is so different and amazing.

Thank you Scott!
Lisa, we were about to collect the female as a specimen for you, but we saw junior move in first! Martha is keeping her eyes open for another one for you!

Most excellent! Love this series!

Emma, in my experience most creatures would rather escape than than fight & put themselves at risk!
Thanks Atul! This is my second cannibalistic spider spotting! http://www.projectnoah.org/spottings/115...
Thanks for your kind comment Adam!

Black widows is a reality in the bay area. Just recently i read an article on how brown widows are taking over and how much more venomous they are.
Black widow venom is 15 times more potent than rattle snake venom.
i have noticed that they usually keep to themselves and do not go out of their way to bite. They retreat into their hideout with great speed and agility.You would actually have to pick one and ask it to bite you.