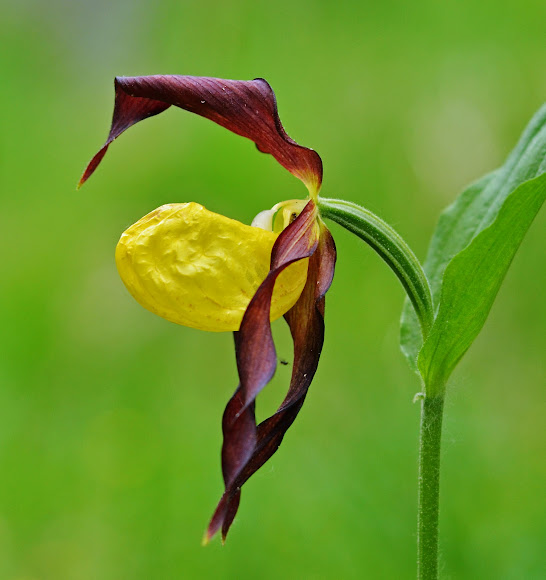 Attention, rare! The beautiful and large primitive orchid Cypripedium calceolus is receding fast in many parts of Europe and legally protected in many countries such as Switzerland. It has virtually been wiped out of the UK due to habitat loss and farming practice. It is the only European representative of the subfamily Cypripedioideae.

A deep alpine gorge with sparse mixed pine + deciduous trees and limestone ground, alt. 1700 m ASL. Note: although the location indicated on the map is the right habitat for this orchid it does not reflect the exact location of the plant. This was the only specimen spotted over a hike of several hours in this area. The last shot shows the plant's habitat.

This orchid’s stem reaches 15 to 60 cm high. The single stem usually carries three to five alternate leaves of broad-oval shape. The flowers are hermaphrodite. Generally this species produces only two flowers per individual, very rarely up to three flowers. This specimen had only one large flower. Each flower has three sepals and three petals. The sepals are up to 5 cm long. Their color ranges from reddish brown to chocolate brown, maroon in this case. The two lateral sepals are fused and pointing down under the lip while the central sepal which extends vertically upwards takes the opposite position. Two narrow petals are similar in shape and color as the sepals. These are arranged on both sides the yellow shoe. The shoe arises from a transformation of the third petal, the labellum. It is hoof-shaped, bulbous, yellow and dotted with brown spots. It can reach a length of 4 cm. The flower of the Venus Shoe is one of the largest flowers of the flora of Western Europe, and has the largest flower among European orchids. Apologies for the lack of a good frontal shot: the slope would not permit it. Credit to my hiking companion and husband Marc Robinson for spotting this plant.

Wonderful! I saw it only once, can't describe my surprise and happiness... Especially, have found rare Species here in Germany!

A beautiful rarity! Thanks for sharing!

Thank you so much Leuba! I did find another one this summer and this reminds me I haven't posted it yet.

I totally missed this one - absolutely beautiful, Daniele ! Thanks for sharing this and for the information. I hope there are more hidden away somewhere, out of man's reach...

Thank you DianaJ.Limjoco, birdlady6000 and Marta! After not seeing any of these for many years I found another patch of 8 nearby. I will upload those shortly.

Nice idea to place a pic of the area where you found the flower..I shall do the same with my future spottings.

Thanks for sharing this rare find. We need to be careful that the wildflowers that are still plentiful are kept that way!

Fabulous shots! Thanks for sharing.

Thank you for your kind words Pam!

Beautiful flower Daniele, and beautifully photographed! So sad it is disappearing... Wonderful place for a walk. Lucky we have people like you keeping an eye on these unique flowers!

Thank you very much Sumukha!

Thank you for your comments Ashish and Emma! Emma this is where we can hope Project Noah can help!

Sometimes knowing the fact that they are disappearing ,helps save them! Lets hope for the best!

Satyen, Arlanda, Emma, thanks for your comments! For information, in my area out of 38 previously known populations for this orchid there appears to be only 10 remaining. At low altitude it seems to have entirely disappeared, possibly due to climate change.

Fabulous series and info. Sad, that we are loosing them. I really liked the habitat :-)

Thank you Dan! We were thrilled:-)