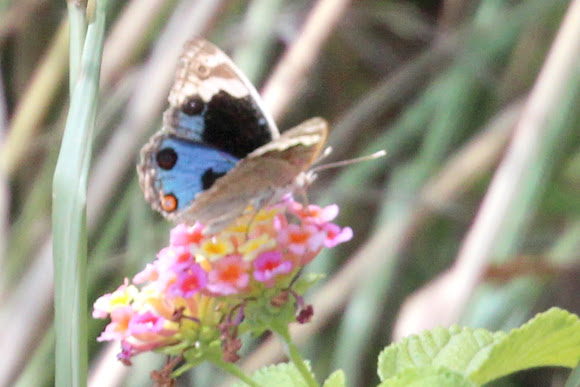 Male upperside : somewhat more than half the fore wing from base velvety black, apical half dull fuliginous ; cell-area with or without two short transverse orange bars ; a blue patch above, the tornus; the outer margin of the basal black area obliquely zigzag in a line from the middle of costa to apex of vein 2, including a large discal, generally obscure ocellus, which, however, in some specimens is prominently ringed with orange-yellow. Beyond this a broad while irregularly oblique discal band followed by a short oblique preapical bar frm costa ; a small black orange-ringed ocellus beneath the bar, a subterminal continuous line of white spots in the interspaces and a terminal jet-black slender line; cilia alternately dusky black and white. Hind wing blue shaded with velvety black towards base; a postdiscal black white-centred orange and black-ringed ocellus in interspace 2, a round minutely white-centred velvety black spot (sometimes entirely absent) in interspace 5; the termen narrowly white, traversed by an inner and an outer subterminal and a terminal black line ; cilia white.
in Hyderabad, India

Underside fore wing: basal half with three black-edged, sinuous, broad, ochraceous-orange transverse bands, followed by the pale discal baud ; ocelli, preapical short bar, subterminal and terminal markings much as on the upperside; the discal band margined inwardly by a broad black angulated line which follows the outline of the black area of the upperside. Hied wing irrorated with dusky scales and transversely crossed by subbasal and discal slender zigzag brown lines and a postdiscal dark shade, on which are placed the two ocelli as on the upperside; sub terminal and terminal faint brown lines, and a brownish short streak tipped black at the tornal angle below the lower ocellus.

Female. Similar, with similar but larger and more clearly defined ocelli and markings ; the basal half of the fore and hind wings on the upper-side fuliginous brown, scarcely any trace of blue on the hind wing. Antennae brown, head reddish brown, thorax and abdomen above brownish black: palpi, thorax and abdomen beneath dull white.

Very good observation. I spotted it in the afternoon.

Maybe early in the morning might be a good time to find them perched?They can become very active as the day progresses.
Usually people look for butterflies in the night when they find them sleeping under leaves.

Thanks. I am doing fine here in Pune.

Somehow I captured it, though not very sharp.

How have you been?

Fine ,thanks for asking!
I was trying to Id this butterfly . Looked under butterflies of Pune. Have not found any thing similar yet.
Will let you know if i come up with something.

Thanks Emma. How are you?