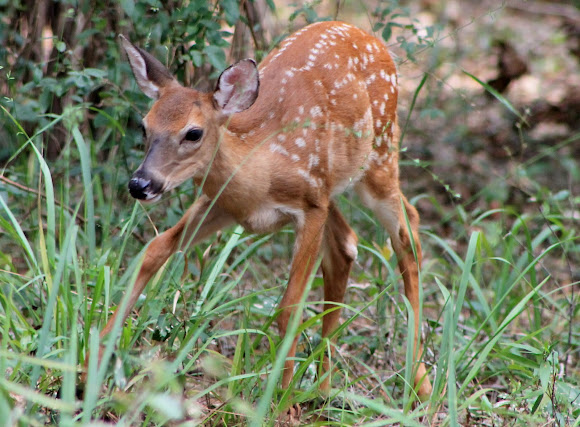 The deer's coat is a reddish-brown in the spring and summer and turns to a grey-brown throughout the fall and winter. The deer can be recognized by the characteristic white underside to its tail, which it shows as a signal of alarm by raising the tail during escape. There is a population of white-tailed deer in the state of New York that is entirely white (except for areas like their noses and toes)—not albino—in color. The former Seneca Army Depot in Romulus, New York, has the largest known concentration of white deer. Strong conservation efforts have allowed white deer to thrive within the confines of the depot. [edit] Size and weight The white-tailed deer is highly variable in size, generally following Bergmann's rule that the average size is larger further away from the Equator. North American male deer (also known as a buck or stag) usually weighs 60 to 130 kg (130 to 290 lb) but, in rare cases, bucks in excess of 159 kg (350 lb) have been recorded. In 1926, Carl J. Lenander, Jr. took a white-tailed buck near Tofte, MN, that weighed 183 kg (400 lb) after it was field-dressed (internal organs removed) and was estimated at 232 kg (510 lb) when alive.[4] The female (doe) in North America usually weighs from 40 to 90 kg (88 to 200 lb). White-tailed deer from the tropics and the Florida Keys are markedly smaller-bodied than temperate populations, averaging 35 to 50 kg (77 to 110 lb), with an occasional adult female as small as 25.5 kg (56 lb).[5] White-tailed deer from the Andes are larger than other tropical deer of this species and have thick, slightly woolly-looking fur. Length ranges from 95 to 220 cm (37 to 87 in), including a tail of 10 to 36.5 cm (3.9 to 14.4 in), and the shoulder height is 53 to 120 cm (21 to 47 in).[6][7] Including all races, the average summer weight of adult males is 68 kg (150 lb) and is 45.3 kg (100 lb) in adult females.[8] Deer have dichromatic (two-color) vision with blue and yellow primaries;[9] humans have trichromatic vision. Thus deer poorly distinguish the oranges and reds that stand out so well

White-tailed deer are generalists and can adapt to a wide variety of habitats.[14] The largest deer occur in the temperate regions of Canada and United States. The Northern white-tailed deer (borealis), Dakota white-tailed deer (dacotensis), and Northwest white-tailed deer (ochrourus) are some of the largest animals, with large antlers. The smallest deer occur in the Florida Keys and in partially wooded lowlands in the neotropics. Although most often thought of as forest animals depending on relatively small openings and edges, white-tailed deer can equally adapt themselves to life in more open prairie, savanna woodlands, and sage communities as in the Southwestern United States and northern Mexico. These savanna-adapted deer have relatively large antlers in proportion to their body size and large tails. Also, there is a noticeable difference in size between male and female deer of the savannas. The Texas white-tailed deer (texanus), of the prairies and oak savannas of Texas and parts of Mexico, are the largest savanna-adapted deer in the Southwest, with impressive antlers that might rival deer found in Canada and the northern United States. There are also populations of Arizona (couesi) and Carmen Mountains (carminis) white-tailed deer that inhabit montane mixed oak and pine woodland communities.[15] The Arizona and Carmen Mountains deer are smaller but may also have impressive antlers, considering their size. The white-tailed deer of the Llanos region of Colombia and Venezuela (apurensis and gymnotis) have antler dimensions that are similar to the Arizona white-tailed deer. White-tailed deer during late winter In western regions of the United States and Canada, the white-tailed deer range overlaps with those of the black-tailed deer and mule deer. White-tail incursions in the Trans-Pecos region of Texas has resulted in some hybrids. In the extreme north of the range, their habitat is also used by moose in some areas. White-tailed deer may occur in areas that are also exploited by elk (wapiti) such as in mixed deciduous river valley bottomlands and formerly in the mixed deciduous forest of Eastern United States. In places such as Glacier National Park in Montana and several national parks in the Columbian Mountains (Mount Revelstoke National Park) and Canadian Rocky Mountains as well as starting to appear in the Yukon Territory ( Kotaneelee )(e.g., Yoho National Park and Kootenay National Park), white-tailed deer are shy and more reclusive than the coexisting mule deer, elk, and moose. Central American white-tailed deer prefer tropical and subtropical dry broadleaf forests, seasonal mixed deciduous forests, savanna, and adjacent wetland habitats over dense tropical and subtropical moist broadleaf forests. South American subspecies of white-tailed deer live in two types of environments. The first type, similar to the Central American deer, consists of savannas, dry deciduous forests, and riparian corridors that cover much of Venezuela and eastern Colombia.[16] The other type is the higher elevation mountain grassland/mixed forest ecozones in the Andes Mountains, from Venezuela to Peru. The Andean white-tailed deer seem to retain gray coats due to the colder weather at high altitudes, whereas the lowland savanna forms retain the reddish brown coats. South American white-tailed deer, like those in Central America, also generally avoid dense moist broadleaf forests. Since the second half of the nineteenth century, white-tailed deer have been introduced to Europe.[17] A population of white-tailed deer in the Brdy area remains stable today.[18] In 1935, white-tailed deer were introduced to Finland. The introduction was successful, and the deer have recently begun spreading through northern Scandinavia and southern Karelia, competing with, and sometimes displacing, native fauna. The current population of some 30,000 deer originate from four animals provided by Finnish Americans from Minnesota.

Yes very healthy. Was great to see We saw about 5 more young ones

Spectacular photos! Looks to be a very healthy baby!