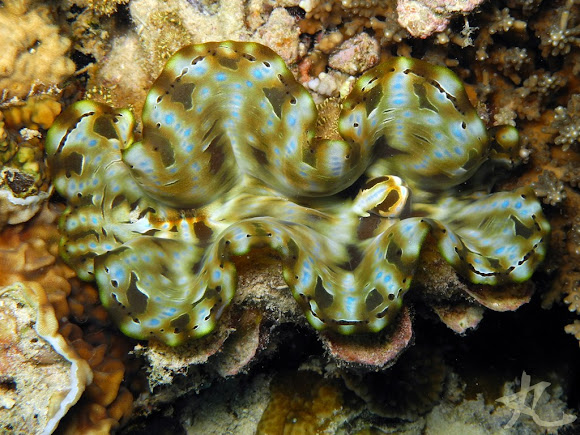 The fluted giant clam, also known as Scaled Clam, can be identified by the large, leaf-like fluted "scales" on its shell -- these are often used as shelter by crab, smaller clam and other invertebrates. The mantle is normally brown, generally mottled with vivid green and blue spots or wavy lines. T. squamosa is a filter-feeder, just like other members of the Tridacnidae family. However, it derives a larger portion of its nutritional intake from energy produced by dinoflagellate algae, which reside on the clam's mantle tissues. By day, the clam spreads out its mantle to maximize the algae's photosynthetic capacity. Sessile in adulthood, this giant clam grows to a size of 40cm across.

Spotted this juvenile fluted giant clam, measuring about 15cm across, during a day dive somewhere near Talikud Island. The map here only shows the general area of this spotting; I don't want poachers to be able to make use of my data to conduct their illegal activities.