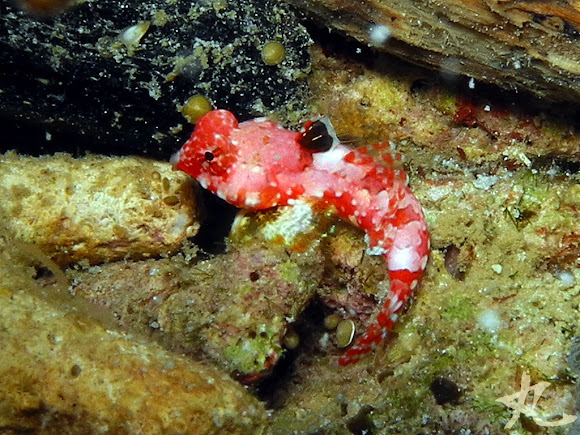 Males, females and juveniles vary in color patterns, but the general theme is a patchwork of predominantly red with specks of white. Males have a black-colored first dorsal fin, which they raise during mating or when they're moving about. They feed on crustaceans and invertebrates, and grow to a length of 7.5cm. This species is also sometimes referred to as Neosynchiropus moyeri.

This species Inhabits coastal reef slopes, from 3 to 30m depth, usually on rubble and sand near large coral formations. Occurs in small, loose groups with a dominant male. Widespread in the Western Pacific area.

Spotted this male dragonet during a day dive at Dayang Beach, Talikud Island, Philippines, in about 16m of water. It measured about 4cm long.

Gracias, harsuame! Well, its cousin, the mandarin fish, is even more sensational. I hope to spot that one soon! ;)