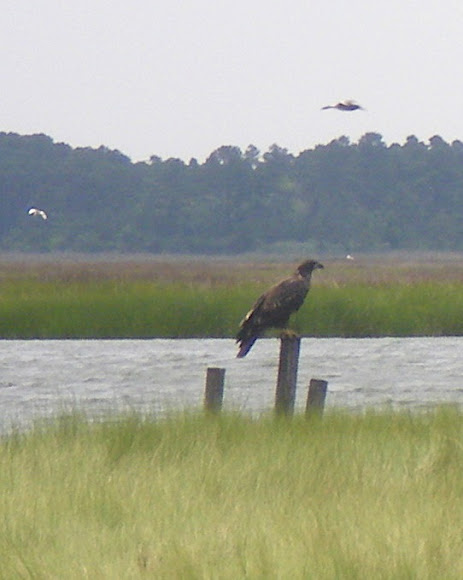 Juvenile bald eagles can be confused with golden eagles. Bald eagles are mostly dark brown until they are four to five years old and acquire their characteristic coloring. There is a distinction between the two species, though, even during the early years. Only the tops of the bald eagle’s legs have feathers. The legs of golden eagles are feathered all the way down.

Bald eagles live near rivers, lakes, and marshes where they can find fish, their staple food. Bald eagles will also feed on waterfowl, turtles, rabbits, snakes, and other small animals and carrion.

Very nice. I recently posted a juvenile BE also. I was excited to have the opportunity to see that juvie hunting with its parent. Thanks for sharing. The composition of your photo is excellent.

Learn something new everyday. Thanks for the photos and the information.