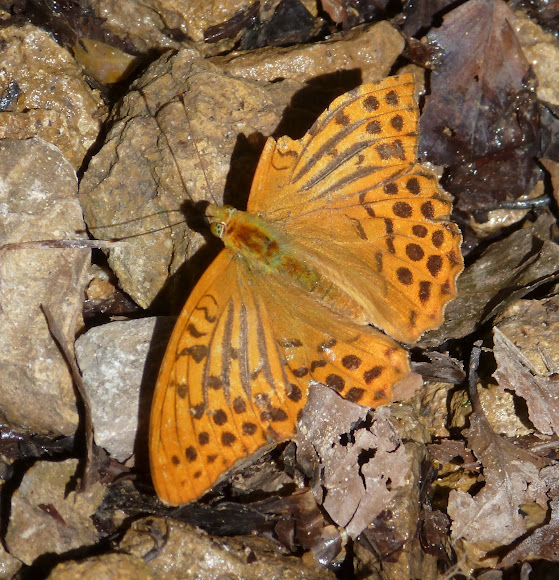 Argynnis paphia is a common and variable butterfly found over much of the Palaearctic ecozone – Algeria, Europe, temperate Asia and Japan. The genus Argynnis comprises of about 25 species, found variously in Europe, temperate Asia and North America. Certain workers include an additional 18 Speyeria species within Argynnis. The Silver-washed Fritillary is one of Europe's largest and most magnificent butterflies. The male, illustrated above is easily distinguished from the female by the 4 prominent horizontal dark streaks on it's forewings. These contain androconial scales, from which pheromones are released during the courtship flight. Females have a similar pattern of black spots, but lack the horizontal streaks. They are normally a dull golden colour, often with a slight bronzy tinge.

The Silver-washed Fritillary prefers slightly shadier conditions than most other woodland Fritillaries and is better able to survive in high canopy forests and woods that have become neglected and overgrown. The highest populations occur in mature oak and beech plantations where a program of regular thinning encourages a profusion of dog violets to germinate beneath the trees. The best sites are also typified by having glades and grassy tracks where thistles, brambles and other nectar sources are abundant. The butterfly is a powerful flyer and quite mobile, being often found on scrubby downland or along hedgerows or railway cuttings where these habitats are close to its woodland homelands. Thus it is able to recolonise neglected woods which have been returned to coppice management and once again become suitable as breeding sites. This one was mud-puddling beside a salt water spring, high up in the shady mountains of Southern France.