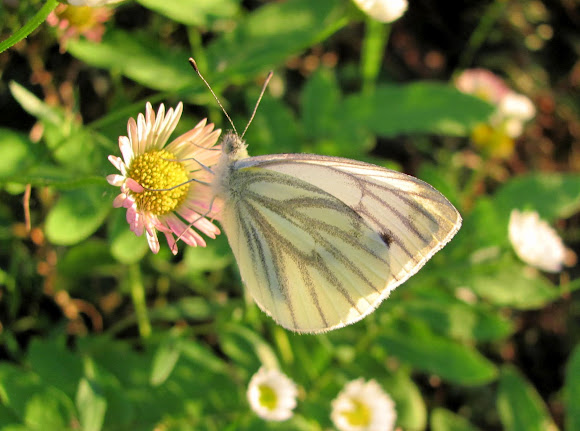 Like other "white" butterflies, the sexes differ. The female has two spots on each forewing, the male only one. The veins on wings of the female are usually more heavily marked. The underside hindwings are pale yellow with the veins highlighted by black scales giving a greenish tint, hence Green-veined White. Unlike these two butterflies it rarely chooses garden cabbages to lay its eggs on, preferring wild crucifers

A circumboreal species widespread across Europe and Asia, including the Indian subcontinent, Japan and the Maghreb and North America (Many authors consider the Mustard White of North America to be conspecific with napi[1] or consider napi to be a superspecies). It is found in meadows, hedgerows and woodland glades but not as often in gardens and parks like its close relatives the Large and Small Whites, for which it is often mistaken. Pieris napi is found in damp, grassy places with some shade, forest edges, hedgerows, meadows and wooded river valleys. The later generations, widen their catchment areas in the search for alternative forage crops in drier, but flowery places . In the Mediterranean the insect is also found in scrub around mountain streams or springs and on floodplains with Nasturtium officinale. It is found from sea level to high altitude (2500m. in Central Europe centrale, 2600 m in Italy).

The generations vary with location, altitude and season. In Northern Europe, there are two or three generations from April to early September. In warmer areas, and in some good years there is a fourth generation. In southern Europe there are three or more partially overlapping generations from March to October Recent research has shown that when males mate with a female, they inject methyl salicylate along with their sperm. The smell of this compound repels other males, thus ensuring the first male's paternity of the eggs—a form of chemical mate guarding. The adult male of this species has a distinctive odour that resembles lemon verbena Some authorities consider Pieris napi to be a superspecies including the West Virginia White Butterfly, the Mustard White and the *Dark-veined White http://www.google.pt/url?sa=t&rct=j&... spotted in a river Cávado beach,gorgeous place,last photo shows that

I agree with igorneau!
BTW thanks for your"Great" comments for the " Great egret!" :)