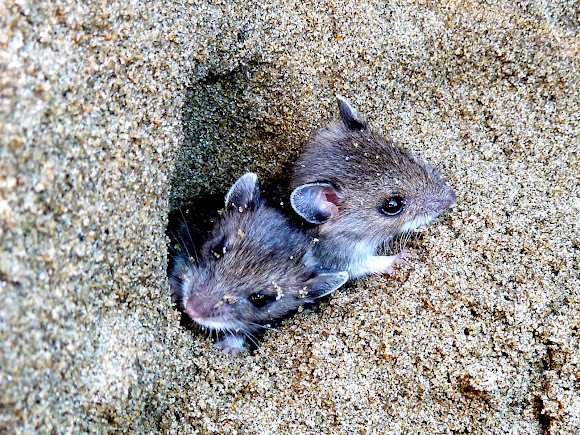 These baby mice (4 total) and mom were found under one of the funnel traps we set for frogs and toads a few meters from a scour hole formed by the Missouri River. Mom had been under the trap several times before, and had been taking the moss out of the traps to build what we assumed was a nest. Even though we came and scared her off several times, she still found it to be a good place to raise her little family. She ran off as soon as we lifted the trap (as usual) so we just dug a little hole beside it and put the youngin's in it instead. I'm not sure of exact species, but I'm leaning toward deer mouse (Peromyscus maniculatus). However I am nowhere near confident on an ID, so if anyone has any suggestions please let me know!

Spotted in a mostly open, sandy, deserted area that was created by sediment from the Missouri River flood of 2011. So many animals have nowhere else to hide but under our traps until the vegetation grows back and the habitat is restored to its natural order. They usually run right out of one trap and into another.

I think you can be confident in your id. Even though they are juvenile mice, they still exhibit a "bi-colored" tail which is a trait of P. maniculatus. Your only other option in Iowa is P. leucopus but their tail would not have that distinct line that separates the dark color of the tail on top to the white color below. Nice photos!