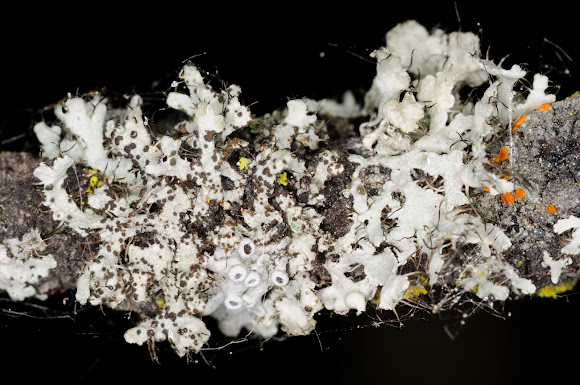 Physcia sp. parasitized by a lichenicolous fungus, dark spots, maybe Abrothallus sp. Lichenicolous fungi live exclusively on lichens, most commonly as host-specific parasites, but also as broad-spectrum pathogens, saprotrophs or commensals. Over 1800 species have been described throughout the Ascomycota and Basidiomycota, and estimates are that 3000 species will eventually be described. 95% of described lichenicolous fungi belong to the ascomycetes. Abrothallus sp. is a lichenicolus fungus, Ascomycota, incertae sedis. Its apothecia are black, emarginate (lecideoid), convex, with a somewhat rugose surface , arising directly on the host thallus.

On a Holm oak twig