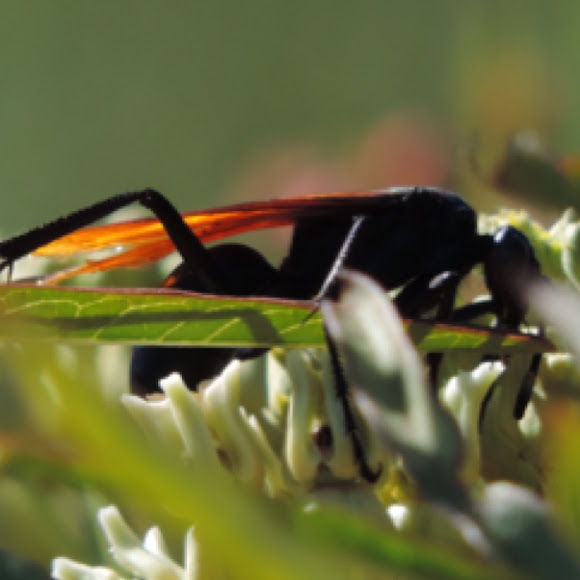 The Pepsis wasp(Pepsis formosa) has a blue-black body, 6 long legs, a pair of long antannae.and large bright orange wings. It is also known by another name, the Tarantula Hawk Wasp. It is among the largest of wasps. The coloring on their wings warns potential predators that they are dangerous (aposematism). Their long legs have hooked claws for grappling with their victims. The stinger of a female tarantula hawk can be up to 7 mm (1/3 in) long, and the sting is considered the second most painful insect sting in the world.

The female tarantula hawk captures, stings, and paralyzes the spider, then either drags her prey back into her own burrow or transports it to a specially prepared nest, where a single egg is laid on the spider’s abdomen, and the entrance is covered. When the wasp larva hatches, it creates a small hole in the spider's abdomen, then enters and feeds voraciously, avoiding vital organs for as long as possible to keep the spider alive. After several weeks, the larva pupates. Finally, the wasp becomes an adult, and emerges from the spider's abdomen to continue the life cycle. Tarantula wasps are also nectarivorous. The consumption of fermented fruit sometimes intoxicates them to the point that flight becomes difficult. While the wasps tend to be most active in daytime summer months, they tend to avoid high temperatures. The male tarantula hawk does not hunt; instead, it feeds off the flowers of milkweeds, western soapberry trees, or mesquite trees (females feed on these same plants, as well). The male tarantula hawk has a behavior called hill-topping, where he sits atop tall plants and watches for passing females ready to reproduce.