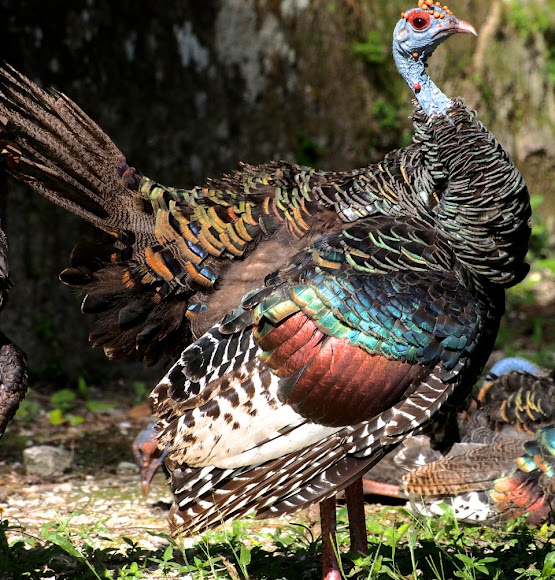 The Ocellated Turkey (Meleagris ocellata) is a species of turkey previously residing primarily in the Yucatán Peninsula. According to the authorities at the Tikal National Park, they are now found only in northeastern Petén in Guatemala. A relative of the Wild Turkey (Meleagris gallopavo) It is a relatively large bird, at around 70–122 cm (28–48 in) long and an average weight of 3 kg (6.6 lbs) in females and 5 kg (11 lbs) in males.

The ocellated turkey is found only in northeastern Petén in Guatemala. They are pretty tame in Tikal and common, but are elusive and wary in most of their range. They have become almost extinct in much of their former range, which included Belize and the Yucatan Peninsula; due to being an easy catch for hunters.

thanks Antonio, Skel, and Seema...

thanks Tiz, and EnvUnlimited, you are most welcome...

Congratulations Pam on a wonderful SOTD!

congratulations on this wonderful turkey.

Beautiful bird Pam,great series,congrats on the well deserved SOTD and thanks for sharing

thanks Luis, suzmonk and Mark...

wow thanks Yasser. That was unexpected! Such a nice surprise this morning...

Wow! Who wouldn't want to be a 'Turkey' that looks like that!!! :)
Congratulations Pam!

Pam, this gorgeous turkey from Guatemala has been chosen as Spotting of the Day! Congratulations and we look forward to seeing much more from you in the New Year.

thanks Kranti and Doreen