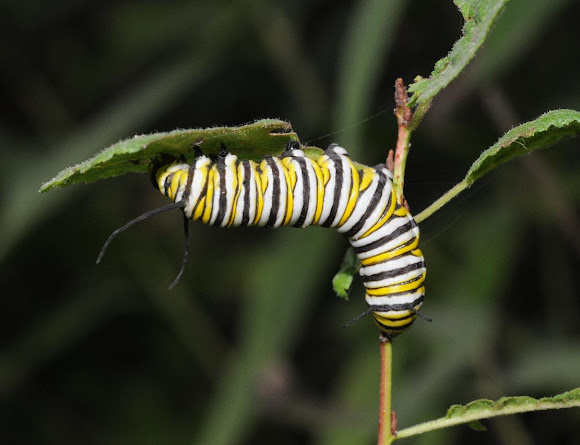 The Monarch butterfly is a milkweed butterfly (subfamily Danainae) in the family Nymphalidae. It is perhaps the best known of all North American butterflies. Since the 19th century, it has been found in New Zealand, and in Australia since 1871, where it is called the wanderer. It is resident in the Canary Islands, the Azores, and Madeira, and is found as an occasional migrant in Western Europe and a rare migrant in the United Kingdom. Its wings feature an easily recognizable orange and black pattern, with a wingspan of 8.9–10.2 cm (3½–4 in). (The viceroy butterfly is similar in color and pattern, but is markedly smaller, and has an extra black stripe across the hind wing.) Female monarchs have darker veins on their wings, and the males have a spot called the androconium in the center of each hind wing. Males are also slightly larger than female monarchs. The Queen is a close relative. (information from Wikipedia)

I don't know the host plant that's being utilized in this spotting, but would love to know what it is if anyone can identify it. It was low-growing and hopefully can be seen in these shots. This spotting took place at the Tallgrass Prairie Preserve.

I have seen them on honey vine occasionally (I get that one in my yard). I'll look into Cynanchum. Thanks for the tip!

This plant didn't look like milkweed. I know they will use other plants but I have no idea about this one.

Aaron; cannot answer your question about the milkweed they are munching.
Here is a good reference about native milkweed species in the prairie, including range maps in Oklahoma: http://www.xerces.org/wp-content/uploads...