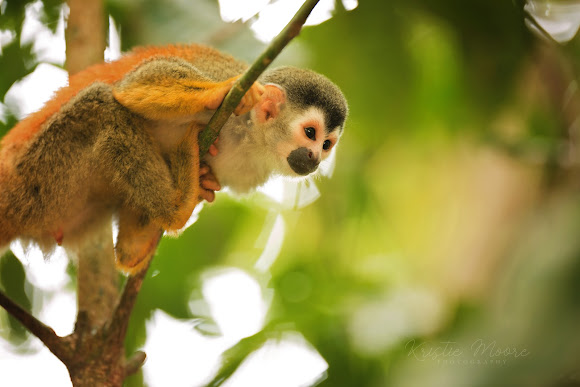 Squirrel monkeys are New World monkeys of the genus Saimiri. They are the only genus in the subfamily Saimirinae. The name of the genus is of Tupi origin (sai-mirim or gai-mbirin < sai 'monkey' and mirim 'small')[3][4] and was also used as an English name by early researchers.[5][6] Squirrel monkeys live in the tropical forests of Central and South America in the canopy layer. Most species have parapatric or allopatric ranges in the Amazon, while S. oerstedii is found disjunctly in Costa Rica and Panama. The common squirrel monkey is captured for the pet trade and for medical research[7] but it is not threatened. Two squirrel monkey species are threatened: the Central American squirrel monkey and the black squirrel monkey are listed as vulnerable by the IUCN.[8][9]