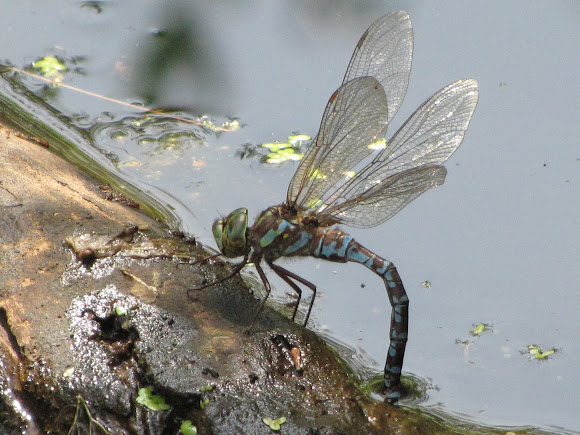 The Darners (or Hawkers as they are known in Europe) (family Aeshnidae) include the largest dragonflies found in North America and Europe, and are among the largest of the dragonflies on the planet. This family represents also the fastest flying dragonflies of the order of the dragonflies and damselflies (Odonata). Common worldwide or nearly worldwide genera are Aeshna and Anax. The African Anax tristis has a wingspan of over 125 mm, making it one of the world's largest known dragonflies. There are 41 North American species in 11 genera represented in this family. Most European species belong to Aeshna. Their American name 'darner' derives from the fact that the female abdomens look like a sewing needle, as they cut into plant stem when they lay their eggs through the ovipositor. The dragonflies mate in flight. The eggs are deposited in water or close by. The larvae (nymphs or naiads) are generally slender compared to those of other families, with long and flat extensible lower lip (labia). They are aquatic predators, feeding on other insects and even small fish. The adults spend large amounts of time in the air and seem to fly tirelessly with their four large and powerful wings. They can fly forwards or backwards or hover like a helicopter. The wings are always extended horizontally. Their abdomen is long and thin. Most are colored blue and or green, with black and occasionally yellow. Their large hemispherical compound eyes touch in the midline and nearly cover the head. They have an extremely good sight. They are voracious insect predators, using their sharp biting mouthparts. They are therefore very beneficial. All are extremely hard to catch because of their flying abilities and keen sight. There has been recently a proposal to split this family in Aeshnidae and Telephlebiidae (Hawking & Theischinger, 1999).[Source: Wikipedia]

The specimen in the photograph was observed laying eggs in plant matter beneath the surface of a lake tributary leading into Lake Mitchell/Lake Cadillac at the William Mitchell State Park in Missaukee County, Michigan