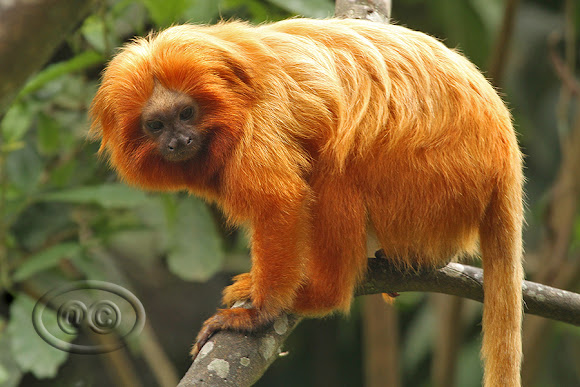 As an endemic species of Atlantic Forest that are extinction threatened, they rarely are viewed like this one, and I could not be more happy to found it, four weeks ago, completely free at the forest, mixed in a group of Black-tufted marmoset (sagui-de-tufo-preto), and away from the area where their populations are currently being controlled.

Golden lion tamarins have a number of features that are atypical for the Order Primates. Their thumbs are not fully opposable and their hallux (big toe) is located back from the other digits (similar to a bird’s big toe) and retained its flat nail. Unlike most New World primates, golden lion tamarin tails are not prehensile. After a week, this wonderful primate abandoned the group and was not more viewed together with them at the places where they are seen almost three times by day.

What a wonderful spotting! Thank you for the information and for sharing :)

Surely I felt I am a very lucky guy after that meeting!
Thank you, AntónioGinjaGinja, Polilla and Vipul Ramanuj.

Wow... Lucky you ! Thanks for sharing the amazing series.

Awesome series Antonio,congrats on the well deserved SOTD and thanks for sharing these beautys :-)

Thank you, Daniele!
I am very happy with the Golden lion tamarin being chosen SOTD!

Congratulations Antonio Carlos, this is the first wild spotting for this rare species on Project Noah, and our Spotting of the Day!