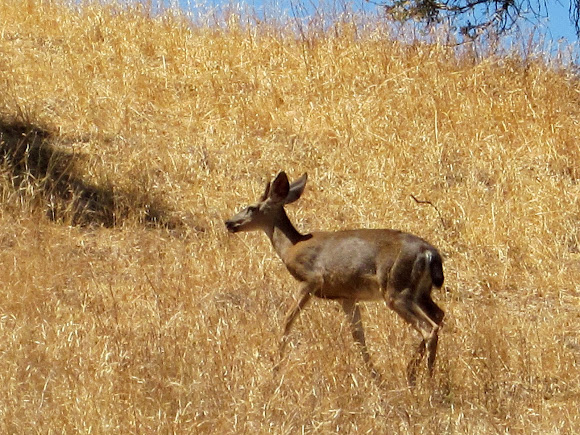 During the winter and early spring they feed on Douglas fir, western red cedar, red huckleberry, salal, deer fern, and lichens that grow on trees. Late spring to fall they munch on grasses, blackberries, fire weed, pearly everlasting, forbs, salmon berry, salal, and maple. The mating or 'rutting' season occurs during November and early December. Bucks can be observed running back and forth across the roads in the pursuit of does. After the rut the bucks tend to hide and rest. Often they are nursing wounds. They suffer broken antlers, and have lost weight. They drop their antlers between January and March. As the antlers lie on the forest floor they provide a source of calcium and other nutrients to other forest inhabitants. Bucks regrow their antlers beginning in April through to August.

Thanks Antonio. That is the beauty of Mt Diablo. The scorching summer makes it look like the African Savannah. It can turn lush green with streams flowing thru it and in winter the top of the mountain is lined with snow. Although it does not snow in California, A snow topped Mt Diablo is a common sight in Winter.

Male Black Tailed Deers usually start regrowing their Antlers from April thru December. The Antlers are usually lost during the mating season