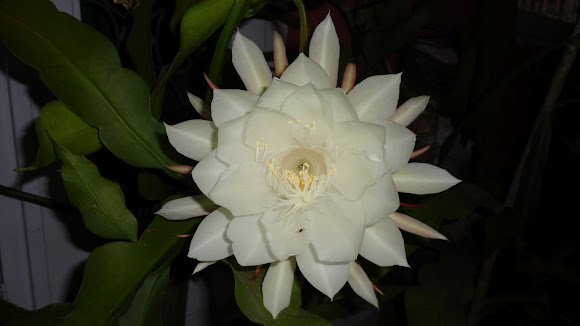 Wijaya Kusuma flower will bloom only for a moment and time in the evenings only. Wijaya Kusuma flowers usually grow authorship. Nusakambangan island is one place where flowers grow Wijaya Kusuma, but in addition there are also Nusakambangan many on the island of the Thousand Islands, Karimunjawa, Madura and Bali. If you view the origin of this interest is from the South American mainland, which later spread to China and go to Indonesia at the time of Majapahit. Many communities on the island of Java believe that anyone could see it bloom Wijaya Kusuma then he will get a fortune. "Interest Wijaya Kusuma or Scientific name is Epiphyllum cactus Anguliger type, enter the division anthophita, nation and class opuntiales dicotiledoneae. There are about 1,500 species (family) of the cactus. Cactus plants can thrive in areas of moderate to tropical. Likewise Wijaya Kusuma "