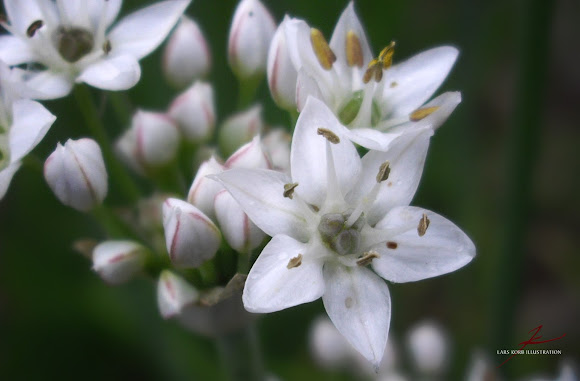 It is also sometimes called "green Nira grass" where "Nira" is Romanization of the Japanese word "ニラ" which means garlic chives. The plant has a distinctive growth habit with strap-shaped leaves unlike either onion or garlic, and straight thin white-flowering stalks that are much taller than the leaves. The flavor is more like garlic than chives. It grows in slowly expanding perennial clumps, but also readily sprouts from seed. Besides its use as vegetable, it also has attractive flowers. Both leaves and the stalks of the flowers are used as a flavoring in a similar way to chives, green onions or garlic and are used as a stir fry ingredient. In China, they are often used to make dumplings with a combination of egg, shrimp and pork. They are a common ingredient in Chinese jiaozi dumplings and the Japanese and Korean equivalents. The flowers may also be used as a spice. In Vietnam, the leaves of garlic chives are cut up into short pieces and used as the only vegetable in a broth with sliced pork kidneys.

Thanks, Allison - you're welcome

Thank you so much for your support in my mission.