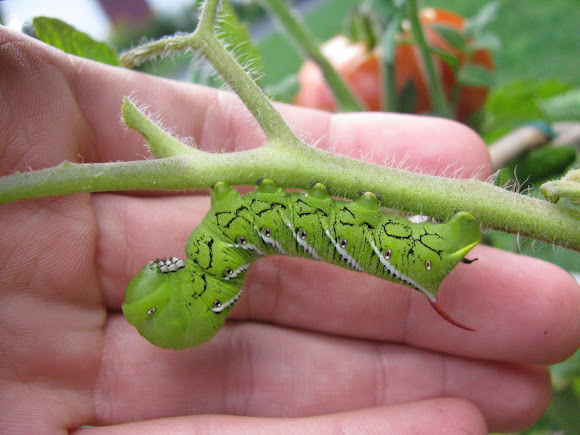 Manduca sexta, commonly known as the Tobacco Hornworm in its larval stage, is actually a very commonly found caterpillar on tomato plants. The contrasting food plant contributes to the mistake that this species is the Tomato Hornworm (Manduca quinquemaculata), which has eight v-shaped stripes. In contrast, Manduca sexta has seven diagonal lines, white, with black on top, and between each line, there is a golden "eye spot," as well as an additional one on the head and near the last leg segment. The seventh diagonal line continues to the red horn, which is characteristic of Manduca sexta, since it usually curves downward. There are three sets of prolegs, which are black and white. Below the diagonal lines are thin black markings which appear to me like chains. There is a fluorescent yellow stripe on the back of the hornworm.

Found feeding on a tomato plant in our mini-garden.