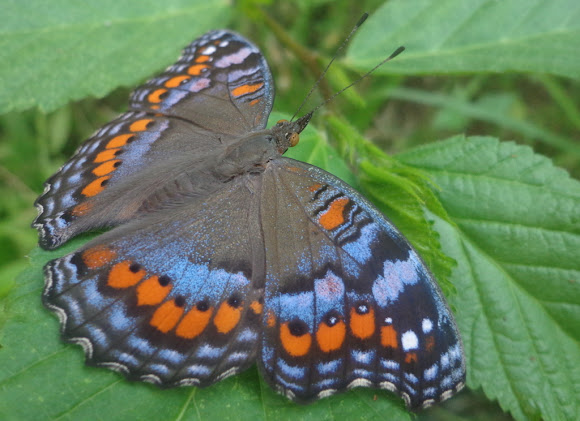 Precis octavia is a species of butterfly in the Nymphalidae family. This butterfly is commonly known as the Gaudy Commodore and is native to Africa. The southern subspecies (Precis octavia sesamus) has a summer form (natalensis) which is red with black markings, and a winter form (sesamus) which is blue with a line of red markings on the wings. The winter form is slightly larger than the summer form. In both forms the males and females are alike, however the females are slightly larger. Intermediate forms of the gaudy commodore are rare, but display a wide range of mixtures of the wing patterns of both forms. The northern subspecies (Precis octavia octavia) has only one form which is red with black markings

Here's another occasion where the maxim "if you love something (or someone), let it go. And if it's yours it would return" proves true. Last harmattan season at first encounter, I was unsure whether this blue beauty was the winter form of the Gaudy Commodore (Precis octavia). Precis octavia or not, I was poised for a photo. A limited edition butterfly for me. Blue butterflies are extraordinary. It was hard to get. In fact, I never got it because it receded into the weedy undergrowth of an uncleared area. Before I gave up the chase, it would briskly spread out its wings and then assume the form of a wilted leaf by holding up the wings together. The dull coloration and markings was an effective for camouflage against the weathered vegetation. A frustrating experience it was. And more painful was the fact that I had no visual memories to share. Listen to fine R&B by Mariah Carey, Butterfly. Here are photos of the summer form taken over two years ago >> http://www.projectnoah.org/spottings/325...

Nice, love all the color!