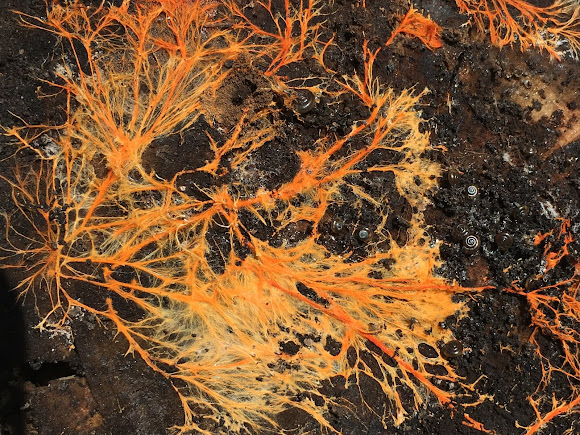 Mycelium is the vegetative part of a fungus or fungus-like bacterial colony, consisting of a mass of branching, thread-like hyphae. The mass of hyphae is sometimes called shiro, especially within the fairy ring fungi. Fungal colonies composed of mycelium are found in and on soil and many other substrates. A typical single spore germinates into a homokaryotic mycelium, which cannot reproduce sexually; when two compatible homokaryotic mycelia join and form a dikaryotic mycelium, that mycelium may form fruiting bodies such as mushrooms. A mycelium may be minute, forming a colony that is too small to see, or it may be extensive:

BONUS: Baby snails. I lifted up a piece of wood, which was on a railroad tie, turned it over & found this beautiful orange root & baby snails!

Thank you, Lisasuits123!
I edited my spotting!!

Thank you!! I thought so too, maplemoth!! I hadn't seen anything like this before & then to see all of the baby snails in their was a bonus!! ;)