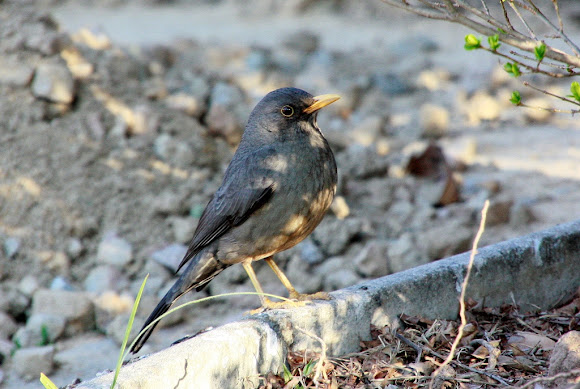 The Karoo Thrush (Turdus smithi) is a member of the thrush family in Africa. It has traditionally been considered a subspecies of the Olive Thrush (with which it is known to hybridize), but is increasingly treated as a separate species. This medium-sized bird has a length of about 24 cm. It has a wing length between 117 and 131 mm, a culmen length between 20 and 24 mm and a tarsus length between 30,0 and 34,5 mm. It can reach a mass of at least 86 g. It differs from the Olive Thrush by its longer, entirely orange bill, its longer wings, and its greyer flanks.

Hi it is a olive thrush

There were 2 pairs. Started visiting our complex few days back. I'll try to take some more pictures.

are we looking at both male and female here ? sweet looking bird much like our blackbird here but bigger. I also like the rusty colour on the lower abdomen. looks like he/she has a hooked upper beak.

A little more information would help with an ID...