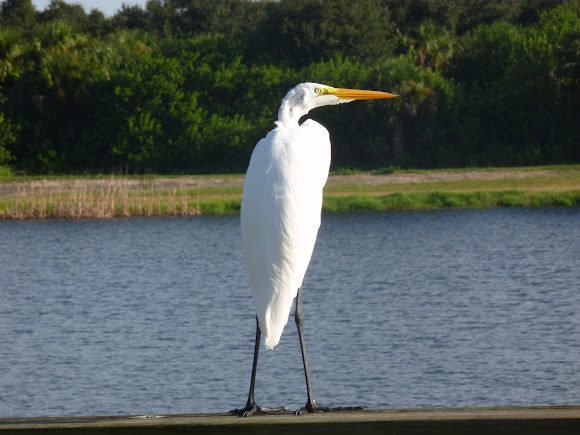 A large all-white heron with a long thin neck, long yellow bill, and black feet and legs. Great Egrets have non-webbed feet and very long toes. They stands about 3 feet tall. During the breeding season, it has long, lacy, white plumes on its back. They can have a wingspan of up to 5 feet and they fly with their necks retracted. A Great Egret's voice has a deep croaking sound. The Great Egret usually breeds in colonies called rookeries. The male chooses a nesting spot and builds a bulky tree-top nest out of sticks before selecting a mate. They can lay 1-6 pale bluish-green eggs. Both parents take turns to incubate the eggs and to feed the chicks. The Great Egret feeds primarily in shallow water where it can catch fish, frogs, small mammals, and occasionally small reptiles and insects. It can spear them with its long, sharp bill. It will either stand motionless waiting for prey to move within striking range or slowly stalk its prey.

Widely distributed across most of the tropical and warmer temperate regions of the world. It is found in both salt and freshwater marshes, sandbars, and other wetlands.

Around the end of the 19th century, Great Egrets were hunted nearly to extinction for their plumes which were used to decorate hats. Conservation efforts have helped to restore their numbers. Their greatest threat now is loss of habitat from development although they have adapted well to urban and suburban areas near water.