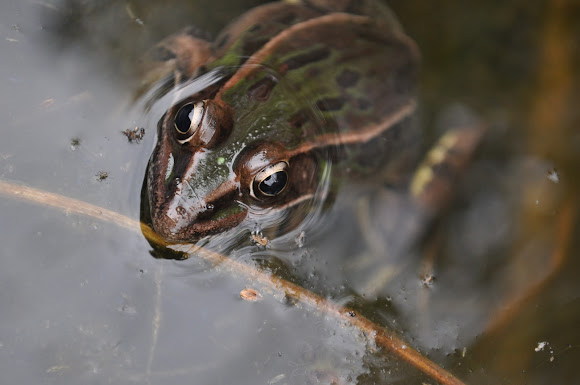 Distinguishable from Northern Leopard frog by pointed snout and light spot on eardrum (see third picture). Generally green or light brown in color, with dark brown or black blotching (that is the origin of their common name). They grow to 3 1/2" inches (90 mm) in length and have a pointed snout. These frogs are usually smaller than their close relative the Northern Leopard Frog and have fewer spots.

This species prefers shallow, freshwater habitats, such as streams, ponds or lakes, with plenty of vegetation for camouflage. They are mostly nocturnal, and carnivorous, consuming almost any kind of insect they can catch and fit in their mouth, as well as earthworms, spiders and centipedes. They are excellent jumpers, and typically escape predation by leaping into the water and swimming to the bottom.

Found in pond outside of Seaside Nature Center. They weren't very shy - let me get close enough to touch!