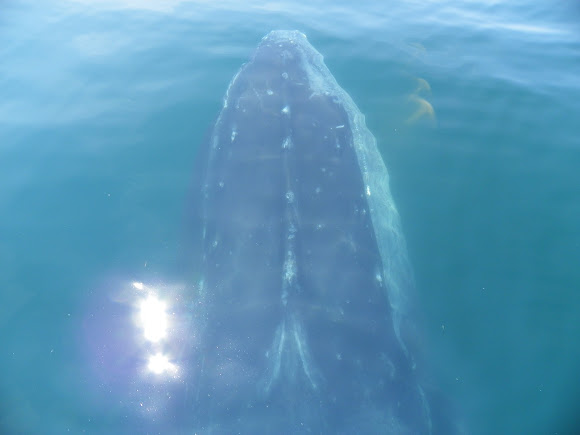 Black with white pectoral flippers. Top of head has "stovebolts" which are prominent bumps. Stovebolts are enlarged hair follicles from which one or two hairs grow. Stovebolts are sensitive to movements in the water. Pleats on underside. Very large tail known as a "fluke".

This is a male whale named Ember. Ember, along with whales Soot and Freefall, paid a visit to the Whale Center of New England's research boat, the Mysticete, which was a converted lobster boat. Ember came alongside the Mysticete; he spent his time rolling in the water, lazily raising and lowering a flipper, spy hopping to check us out and hanging vertically in the water for close to 30 minutes. This photo is Ember hanging vertically in the water beside us. There were six of us who shared this incredible experience of having Ember up close and personal while Soot and Freefall remained a short distance from the boat. They, too, spyhopped, rolled, flipper slapped in a lazy manner. It was my daughter's 30th birthday; what a gift we all received!