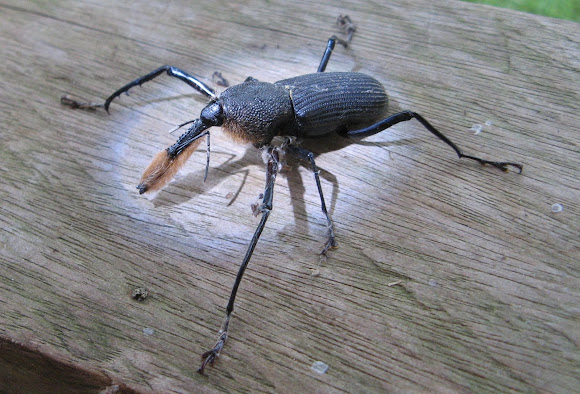 The aptly named “Bottlebrush Weevil” or “Bearded Weevil” (being bearded myself, I’m partial to this name) is one of the 3 largest weevils in the world, reaching lengths of 40 millimeters. This one was 27 mm long, excluding the 10 mm snout. They are solid black with reddish-brown to beige bristles on the snout and have lengthwise grooves in the elytra. They rear up on their hind legs in a "defensive" position when molested (Foto # 5).

These weevils are found throughout Central and South America. This one was found in a jungle house in the Amazon Rainforest of SE Ecuador (700 masl).

I have no idea why, but for an extended period of several weeks, these were very common here, especially under outside lights and in our house. We would find several each day, clean the cobwebs, lint, etc off of their feet and snout and release them outside. We have very rarely seen one since that “infestation.” Weird.

I didn't even know it was a weevil until I started researching. I've always just called them "snout beetles." One does normally conjure up images of weevils like are found in grain and food. Thanks Neil.

That's amazing, Tukup. Truly amazing. And in the spotlight too! I didn't know weevils could be so big.

Impessive size for a weevil. Thanks for sharing, Tukup!