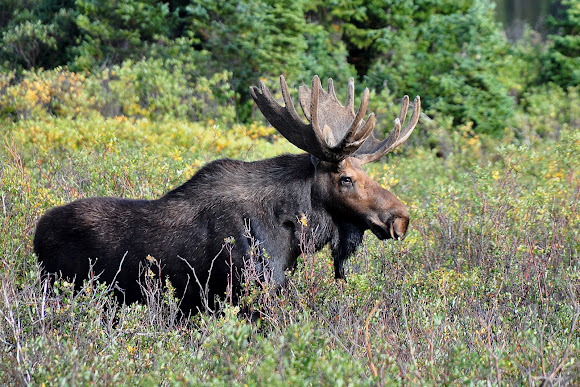 The moose (North America) or Eurasian elk (Europe) (Alces alces) is the largest extant species in the deer family. Moose are distinguished by the palmate antlers of the males; other members of the family have antlers with a dendritic ("twig-like") configuration. Moose typically inhabit boreal and mixed deciduous forests of the Northern Hemisphere in temperate to subarctic climates. Moose used to have a much wider range but hunting and other human activities greatly reduced it over the years. Moose have been re-introduced to some of their former habitats. Their diet consists of both terrestrial and aquatic vegetation. The most common moose predators are wolves, bears, and humans. Unlike most other deer species, moose are solitary animals and do not form herds. Although generally slow-moving and sedentary, moose can become aggressive and move surprisingly fast if angered or startled. Their mating season in the autumn can lead to spectacular fights between males competing for the right to mate with a particular female.

Got up early and headed for Brainard Lake...2 bull moose were munching away on the willows...enjoying the beautiful morning! These are all pics of the same moose...the other was laying down and was very hard to see. What a sight!

Thank you Emilie! It was unbelievable! My first encounter with a moose!!!

What a magnificent animal! Beautifuls shots, too.

Thanks, all...Maria, I didn't post that because Emily's head shot was so much better and she used it as the main shot!!! (we were standing next to each other!!
Cindy, these guys were up at Brainard Lake which is about 45 minutes west of Boulder...it was the closest I could think of at the time...but I just changed it to Ward, CO...closer!! ;-)

Beautiful series! I didn't know they came down to Boulder. I lived in CO for 11 years and never even saw one. I guess I better keep visiting ;)

Oh wow Christy! These came out great! You got so much more color in your photos then I got in mine!