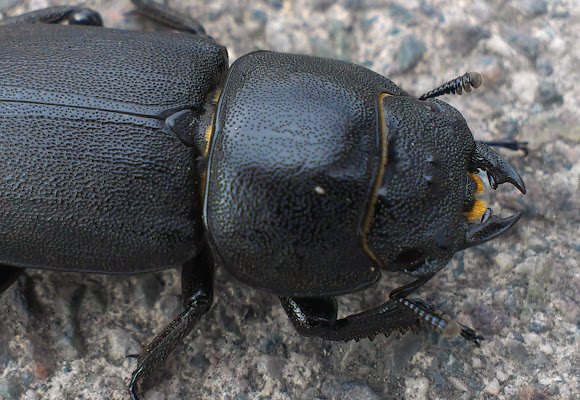 One of two stag beetles found in the UK, this one is smaller (rarely bigger than 3.5cm) and has a matte black abdomen instead of a shiny chestnut one. The males don't posses the large mandibles of the larger stag beetle, so both sexes look similar. This one is a female though, identified by the two little knobbly bits on her head. The head is also much wider in males. Generally found between May and September.

In general, lives around fields and woodland, basically needs places with rotting wood as this is what the larvae feed on. I found this one on the footpath I use to walk home from work, which is very near to a meadow.

I was very excited when I saw this, as I thought it was a female stag beetle (rather than a lesser one), which are rare and protected species in the UK. She is still quite a lovely specimen though! I picked her up off the path and set her on the grass after I took some pictures to make sure no one stepped on her. Would also like to add that I *have* seen a male stag beetle (not lesser) where I live, but have yet been unable to take a photo!