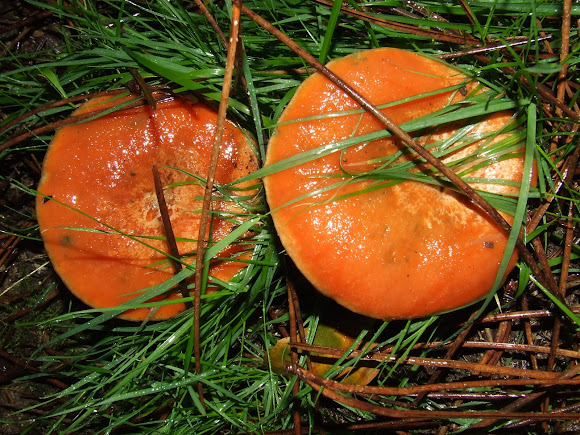 Lactarius deterrimus, also known as false saffron milkcap, is a species of fungus in the family Russulaceae. The fungus produces medium-sized fruit bodies (mushrooms) with orangish caps up to 12 cm (4.7 in) wide that develop green spots in old age or if injured. Its orange-coloured latex stains maroon within 30 minutes. The cap is 3 to 10 centimetres (1.2 to 3.9 in), rarely up to 12 centimetres (4.7 in) wide and more or less centrifugal-shaped and round. It is at early stage convex and furled on the slightly churlish edge, and depressed in the centre and later flat, funnel-shaped depressed. The cap skin is bare, greasy in moist weather and slightly shiny when dry. The cap is tangerine to orange-brown, darker zoned towards the edges and dulls mainly yellow-brown. In old age or after cold or frost it changes the colour more or less to dirty greenish or green-spotted.

Lactarius deliciosus grows under the acidic soil of conifers and forms a mycorrhizal relationship with its host tree. It is native to the southern Pyrenees where it grows under Mediterranean pines. Lactarius deterrimus is a mycorrhizal fungus that associates with Norway spruce and bearberry. The species is distributed in Europe, but has has also found in parts of Asia. Research has shown that the similar North American species from the United States and Mexico is not closely related to the European species. Fruit bodies appear between late June and November, usually in spruce forests.

Spotted in a mix forest near my house Pics #2,#4 and #6 where taken 3 days after the others

Thanks Argy,first time i saw it i thougth that was a saffron milk,only the blue\greenish collour that show in the cut's or with age,the spore print is white,para because of the cup shape dificult to have the gills all at same plan,and the result is not famous

Interesting species Antonio. We don't have this. Very similar to real saffron milkcaps but no colour patches?