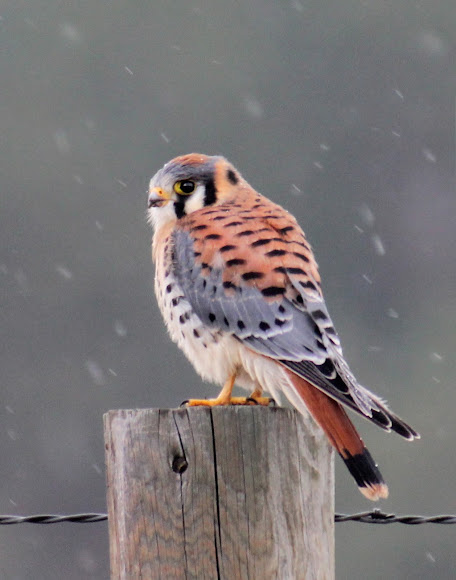 The American Kestrel, also know as the Sparrow Hawk, is a small falcon, and the only kestrel found in the Americas. It is the most common falcon in North America, and is found in a wide variety of habitats. It is the smallest raptor in North America and is sexually dimorphic. This is a male!

High mountain meadow in the foothills.

This little guy was still trying to hunt during this late summer storm.

Thank you EnvUnlimited! I love this guy!

I don't currently have a photography specific feed. However, please feel free to "LIKE" my facebook page for my artwork. http://www.facebook.com/marinoartsandill...

I have recently started to incorporate my photography into the posts!

Your shots are fantastic!!!

...and thanks again Yuko! This photo is one of my favorites! I was lucky to have captured the moment at all!

What a beautiful bird!
I, too, love the snow falling on the background. Lovely. :)

Thank you Perils, he was a cutie indeed!

Thanks so much for sharing this beautiful little bird with me and the members in CFF! :)

These birds are so cool looking. Great shot again.

They are so beautiful! They often get overlooked due to their size! His color was so vibrant against the dark sky and background! Thanks again Adam! :)

Thank you Karen and Andi! I was lucky! I drove past him the other afternoon and after about 2 miles I decided to turn around and get a picture! I was lucky he was still there when I returned!

Soooooo beautiful! The snowy background makes it even better!