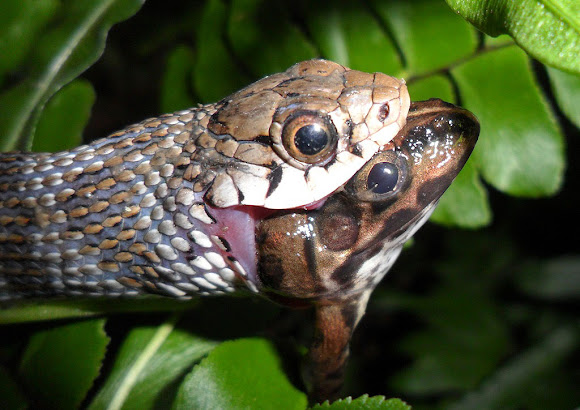 The buff striped keelback is diurnal, and although mostly seen on land, it can readily take to water. It has long rear teeth for catching frogs and toads. The buff striped keelback is nonvenomous and totally harmless. When alarmed, it inflates its body causing the bright interscale colours to be exposed. Sometimes, the snake flattens and narrows its head to form a hood. This behaviour sometimes causes the species to be mistaken by laypersons for a baby cobra.

this snake looks like a cobra，but is smaller than the cobra，but his appetite was amazing，it can eat down a life frog.

What a great series. The cycle of life.

Amazing set of shots! Thank you for sharing :)

Wow, what an amazing series. Kind of makes you wish it would bite the frog and kill it before swallowing it alive though. Congratulations on your SOTD!

thank you Jolly ,Reza and Ary !

Many thanks for the nice words and encouragement guys 'n gals :-)

and 68 other people favorited this spotting