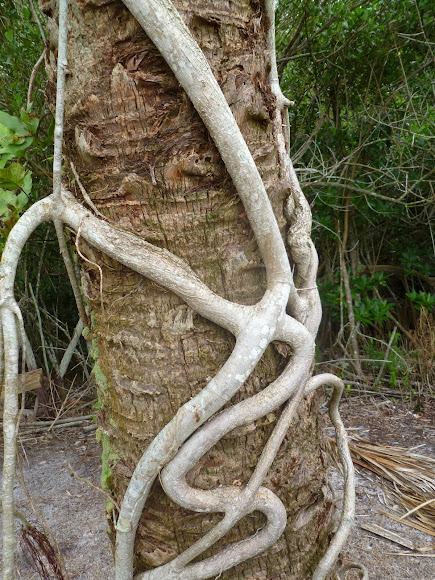 The strangler fig is a fast growing tree that can grow quite large. It often begins as an epiphyte on other trees when a bird drops a seed into a crevice of the tree. The plant sends down long roots that become lattice-like on the trunk. Eventually the network of aerial roots form a twisted trunk and can completely strangle the host tree. It has large thick leathery leaves that are a dark shiny green. They leaves are arranged alternate. Strangler figs can become leafless in the winter months in colder regions. The flowers are small and inconspicuous at the leaf axil. It produces a small round fruit about 3/4 inches in diameter.

Strangler fig is a Florida native species. It is found in coastal hardwood hammocks in tropical and temperate regions and along waterways.

I found this strangler fig in the hammock near Sams house on Pine Island. All figs species can only be pollinated by fig wasps, and fig wasps can only reproduce in fig flowers. The fruit of the strangler tree is edible and was used for food by early settlers in Florida. The tree is also called a Banyan or rubber tree and it produces a latex that was used to make a chewing gum. Its aerial roots may have been used to make lashings, arrows, bowstrings and fishing lines. The fruit was used to make a rose-coloured dye and also used in traditional medicine in The Bahamas as an anti-bacterial.