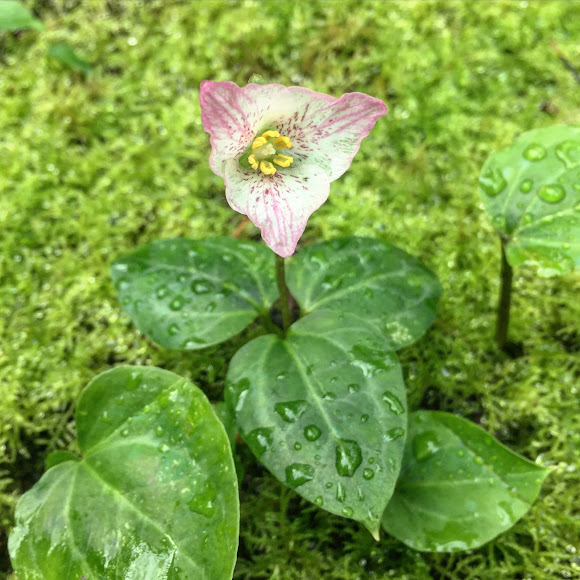 Pseudotrillium is a proposed monotypic genus of flowering plants containing the single species Pseudotrillium rivale, which is known by the common name brook wakerobin.[2] The genus was proposed in 2002 on the basis of morphology and molecular evidence that suggest the plant should no longer be included in genus Trillium.[3] This species is endemic to the Siskiyou Mountains of southern Oregon (Josephine, Coos, Douglas, + Curry counties) and northern California (Siskiyou + Del Norte counties), usually on soils of ultramafic origin, such as serpentine.[1][4][5] Pseudotrillium rivale is a rhizomatous perennial growing up to 20 centimetres (8 in) in height. The three bracts have generally lance-shaped blades up to 11 centimetres (4 1⁄3 in) long borne on petioles. The blades are glossy blue-green with silvery venations. Atop the whorl of bracts is a single nodding non-fragrant flower with green sepals and pink-blushed white petals up to 3 centimetres (1 1⁄4 in) long by 2 centimetres (4⁄5 in) wide.[6] This plant has gained the Royal Horticultural Society's Award of Garden Merit.[7]

Riparian woodlands by a brook leading into the Smith River in Hiouchi, California