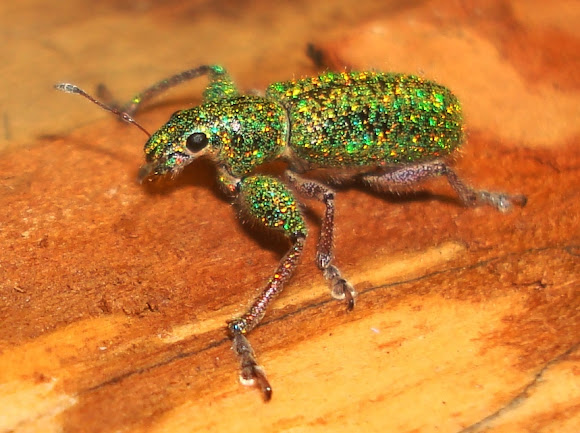 Broad-nosed weevil of approximately 7 mm in length. Covered in green and gold metallic scales that fall off when handled too roughly and as the beetle ages. Strongly developed front femora. Family Curculionidae, Subfamily Entiminae. This weevil was recently spotted again, the last 5 pictures are from 14 June 2013 in the same field. Many weevils can't or don't fly readily, this one can fly very well (last picture). I can't really see from where I find him, why he has such enlarged front femora. It doesn't seem to require such enormous musculature in the front legs.

Found on the upper leaf of a bush, close to the stem. Falls and plays dead when molested. Howden Anne. T. 1982. Revision of the New World genus Hadromeropsis Pierce (Coleoptera, Curculionidae, Tanymecini). Contributions of the American Entomological Institute. vol. 19 (6) i–iii, 1–180.

Thank you Tyson, I still find these every once in a while from August into October.

This is sooooooo Cool!

Thank you so much Norieth :)

I found this weevil again this year and have added more pictures.

Looks like it has glitters all over! Very beautiful!

I wish to thank everyone who made so many wonderful comments about this weevil. He and I are both very grateful. Thanks!

Thank you Entiminae for your help with the identification.

Congratulations Lauren! The weevil is remarkably beautiful and unique; we don´t have those sort of weevil´s here and couldn´t imagine one with such colors if it wasn´t for looking at your picture. Thanks for sharing it too. Greetings