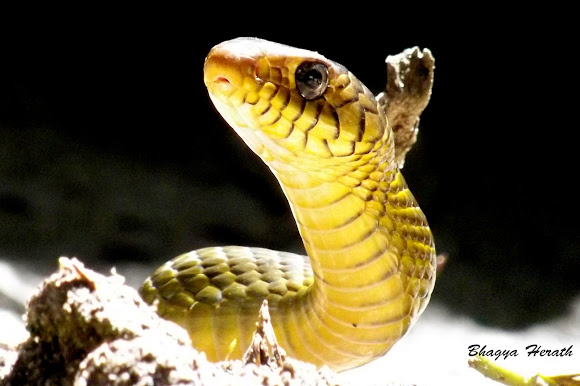 The sub species of these Ptyas mucosa maximus is endemic to Sri Lanka The specific name of the Rat snake in Latin " mucosus" implies slimy, an erroneous belief held by many. The Rat snake is a large snake. Many rat snakes over eight feet ( 2400 mm) long have been observed. The largest specimen seen was at Hanthana Mountain, Kandy that measured 3000mm. The head is elongate, the eyes are large and the neck distinct. The body is long and cylindrical. The tail is long, round and tapering. The Rat Snake is The commenest snake in the country form the highest altitude. (2200 mm) to the sea level. The dorsal ground ground color varies in the rat snake. Four distinct color variations were observed ; 1) mixture of yellow/ brown, 2) Olive and yellow, 3) Black, and, 4) Albino. The commonly found color variations are former two. This is a terrestrial snake with diurnal habits. The natural habitats of the rat snake are plantations paddt fields and humen habitations. They are active snakes. They climb trees and roofs in search of its prey. Though this snake is popularly know as the rat snake its main food consists of amphibians. The female lays 10 to 30 large eggs, usually in a termite mound, or tree hole. Rat Snake can be bold and fierce when cornered may bite savagely. The Ptyas mucosus maximus is a non-venomous snake. There is a popular belief that if a rat snake bites, other snakes will not bite that particular person.

Thanks a lot Adi and Dilan....

Such a gorgeous spotting :) Love it :)