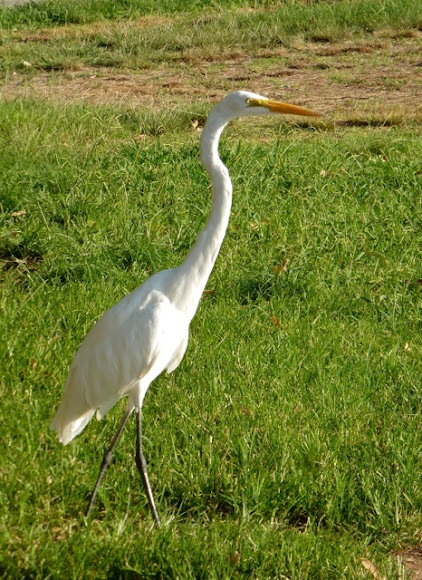 The Great Egret (Ardea alba), also known as Great White Egret, Common Egret, Large Egret or Great White Heron,[2][3][4] is a large, widely-distributed egret. Distributed across most of the tropical and warmer temperate regions of the world, in southern Europe it is rather localized. In North America it is more widely distributed, and it is ubiquitous across the Sun Belt of the United States and in the rainforests of South America.

Several of these birds were seen in a large park around Lake Balboa on the outskirts of Los Angeles.

thanks Janice Parr, LoisStacey and LauraMaria for the ID of this elegant bird.

Janice is correct that this is an egret, specifically the great egret, Ardea alba :D Great find, they're beautiful birds!