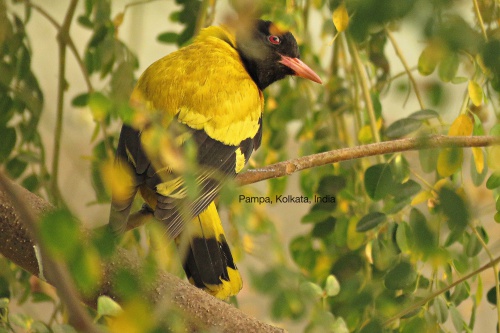 A widespread resident in India and its striking yellow plumage with a black hood stands out amongst the vegetation. The male is striking, with the typical oriole black and yellow colouration. The plumage is predominantly yellow, with a solid black hood, and black also in the wings and tail centre. The black head of this species is an obvious distinction from golden oriole.

It is a bird of open woodland and cultivation. The black hooded oriole lives in common contact with humans in rural and urban India. The nest is built in a tree. Its food is insects and fruit, especially fig, found in the tree canopies where they spend much of their time.

The Bengali name of the bird is "bene-bou" which means the merchant's wife. As per the folk tale of Bengal - a merchant (bene)'s wife (bou) has been turned to this yellow bird with black hood by one of the many Goddesses.