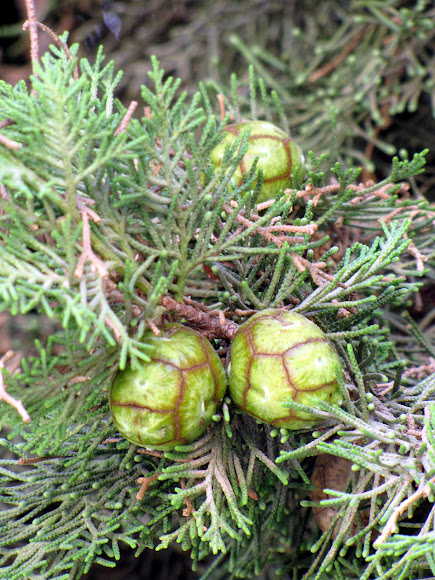 Cupressus sempervirens, the Mediterranean Cypress (also known as Italian, Tuscan, or Graveyard Cypress, or Pencil Pine) is a species of cypress native to the eastern Mediterranean region, in northeast Libya, southern Albania, southeast Greece (Crete, Rhodes), southern Turkey, Cyprus, Northern Egypt, western Syria, Lebanon, Israel, Malta, Italy, western Jordan, and also a disjunct population in Iran. It is a medium-sized coniferous evergreen tree to 35 m (115 ft) tall, with a conic crown with level branches and variably loosely hanging branchlets.[1] It is very long-lived, with some trees reported to be over 1,000 years old. The foliage grows in dense sprays, dark green in colour. The leaves are scale-like, 2–5 mm long, and produced on rounded (not flattened) shoots. The seed cones are ovoid or oblong, 25–40 mm long, with 10-14 scales, green at first, maturing brown about 20–24 months after pollination. The male cones are 3–5 mm long, and release pollen in late winter. It is moderately susceptible to cypress canker, caused by the fungus Seiridium cardinale, and can suffer extensive dieback where this disease is common. The species name sempervirens comes from the Latin for 'evergreen'. (Wikipedia)

This tree was in a hot, dry Mediterranean environment.

Thanks,EmilieWatchesTrees, for vastly improving the ID for this tree!

Now I'm wondering if this is a cypress rather than a juniper. Any thoughts?

Thank you for welcoming me

Thanks East End and Emma. There's no way the tree was trimmed; that's its natural growth pattern.

Thanks Luis. PN has taught me to take pictures of as many aspects of an organism as I can. It's much easier with a plant than with a bird ;)

The tree looks like it was trimmed ?
nice series!