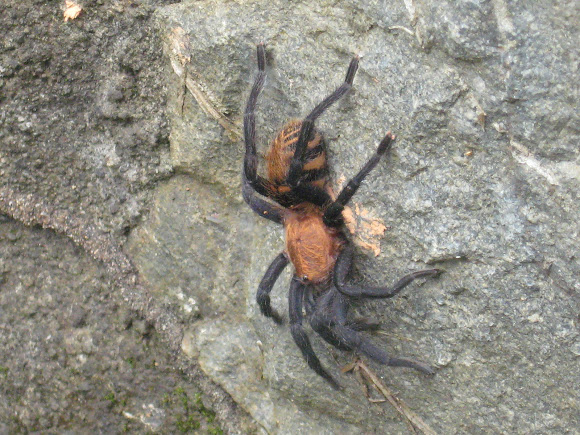 from http://www.butterflies.org/animals-plant... Native to the tropical forests of Costa Rica, this attractive species of small tarantula normally runs about during daylight hours and are thought to mimic orange and black mutillids (velvet ants). Velvet ants have powerful stings and are respected by predators. Thus, by resembling these ants, the tiger rump is also avoided by predators. The animal protects itself by kicking off abdominal hairs, which cause itching dermatitis.

This was in my backyard, and the gardeners working with me said they commonly find them when doing yardwork around Atenas, which has a typical mid-altitude tropical climate (~750M above sea level) with Pacific slope influence (a drier climate than Costa Rica's eastern slope areas).

The abdomen banding pattern shows is zebratum, two thin orange bands in front of the urticating hair patch, which do not join together and do not merge to give an orange spot anterior to the urticating patch.